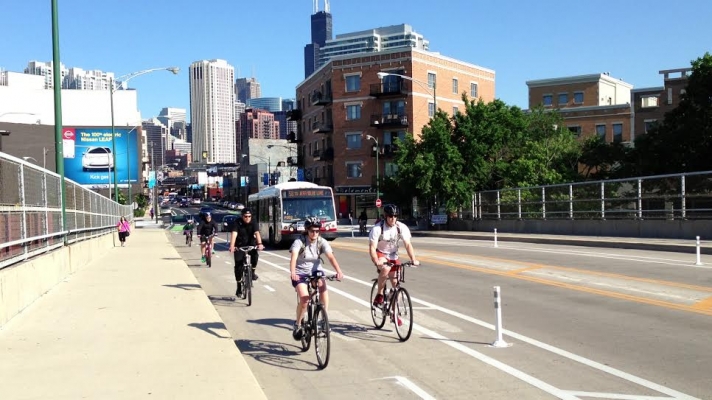 As cities move to increase levels of bicycling for transportation, many practitioners and advocates have promoted the use of protected bike lanes (also known as “cycle tracks” or “protected bikeways”) as an important component in providing high-quality urban infrastructure for cyclists. These on-street lanes provide more space and physical separation between the bike lane and motor vehicle lane compared with traditional striped bike lanes. However, few U.S. cities have direct experiences with their design and operations, in part because of the limited design guidance provided in the past. There is limited research from North America on protected bike lanes, but preliminary evidence suggests that they can both improve the level of comfort of cyclists and potentially increase the number of people cycling. This research evaluates protected bike lanes in five distinct contexts varying in population, driving and cycling rates and cultures, and weather: Austin, Texas; Chicago, Illinois; Portland, Oregon; San Francisco, California; and, Washington, District of Columbia.

These five cities participated in the inaugural “Green Lane Project” (GLP) sponsored by...

Blueprint for Better Biking: 40 Ways to Get There

Bicycling in Davis, CA : A Critical Look at Policy and Behavior in the First Platinum Bicycle City in the U.S.

In 2005, Davis, California was the first city in the U.S. to be named a Platinum-level Bicycle Friendly Community by the League of American Bicyclists. Although Davis has long been held up as a model bicycling community, where residents bike as a normal part of their daily lives, it has not been rigorously studied. Several studies underway at UC Davis are helping to fill this gap: an analysis of the history of bicycling policy in Davis; a behavioral study of factors contributing to high levels of bicycling in Davis in comparison; and an evaluation of a recent campaign to get kids to bicycle to soccer games. This presentation offers highlights from a three studies to provide a critical assessment of Davis as a bicycling community.

Susan Handy is a professor in the Department of Environmental Science and Policy and the director of the Sustainable Transportation Center at the University of California Davis. Her research focuses on the connections between land use and transportation, and she is well known for her work on the impact of neighborhood design on travel behavior. She serves on three committees of the Transportation Research Board and on the editorial boards of several journals in the fields of planning, transportation, and public health. 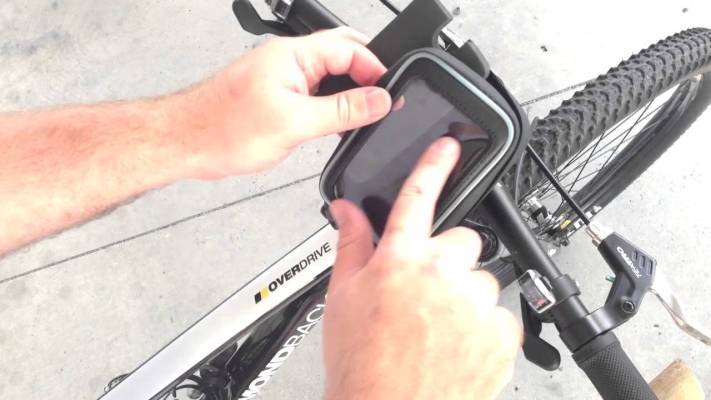 ORcycle is a new smartphone application (for both Android and iOS) developed by Transportation, Technology, and People (TTP) lab researchers at Portland State University as part of an Oregon Department of Transportation (ODOT) research project. ORcycle collects user, route, infrastructure, crash, and safety data. ORcycle was successfully launched in early November 2014 and presents many improvements over existing or similar apps. Initial data findings and insights will be presented. Lessons learned as well as opportunities and challenges associated with smartphone data collection methods will be discussed. More information about the app can be found here: http://www.pdx.edu/transportation-lab/orcycle 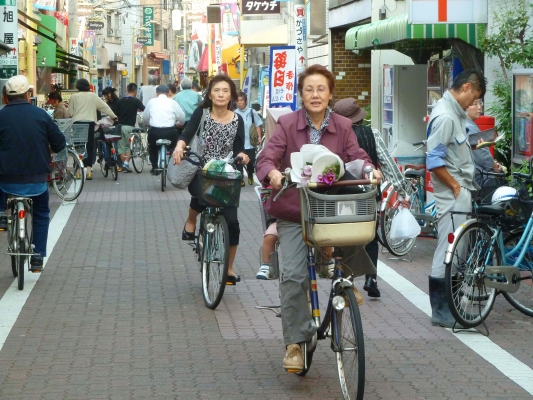 This illustrated presentation, based on four-years of cultural-landscape research culminating the publication of世界が称賛した日本の町の秘密 (Secrets of Japanese Cities the World Admires. Tokyo: Yousensha, 2011), begins by discussing why mamachari are perfect for local transportation and the many practical ways Japanese use them. It then explores why many of Japan’s densely populated, fine-grained neighborhoods with auto-resistant narrow streets and nearby shopping, make ideal bicycle neighborhoods. Issues explored will include the mamachari’s impact on: neighborhood livability; sustainability; public health through active transportation; fostering direct human contact not possible with motor-car travel; and maintaining the compact human scale of communities by limiting transport of daily...

Where Do People Bicycle? The Role of Infrastructure in Determining Bicycling Behavior

This seminar will present results from the BikeGPS study that collected data from Portland area bicyclists using GPS technology. The study collected data from over 150 cyclists for seven days each during 2007, resulting in detailed information for over 1,500 bicycle trips throughout the urban area. The GPS data provides detailed information on the amount, location, and speed of bicycle travel and allows us to answer questions about route choice. For example, how much to people ride on roads with bike lanes, on bike boulevards, or paths? Do these patterns vary by gender, age, or other factors?

Bicycling in Davis, CA: Rise and Maturation of Bicycle Engineering, Advocacy and Policy from 1960s - Present

Before there was "Portland, Bike City USA" there was "Davis, Bicycle Capital of America."

Davis and Portland are very different places. Portland is big, old, industrial. Davis is small, new, nerdy. Portland has hills and rain. Davis is flat and dry. But they are both places where people bicycle. A lot. Ordinary folks come to these cities and often start riding a bike. Bicycling in Davis began in the 1950s, when it was a tiny city with the UC agricultural campus. As the city grew, citizens demanded bicycle infrastructure. After years of negotiation, city authorities gave in to pressure and instructed their staff to begin providing for bicycles. Everything had to be designed from the ground up. America had very little bike infrastructure, but that didn't stop Davis from trying dozens of different types of lanes, paths, intersection treatments, etc., and devising workable solutions. So workable, in fact, that they became the California standard, and then the American standard. As America was adopting Davis's designs, Davis continued to promote and accomodate bicycling on many levels, and in 1980 28% of the population commuted by bike.

Now, Davis and Portland are both rated "Platinum" cities for bicycling by the League of American Bicyclists. But they're still as different as night and day. Portland...