The Impacts of Gentrification on Transportation and Social Support for Black Working-Poor Families in Portland, Oregon

The historically Black district of Albina in Portland, Oregon, due to racist real estate practices, faced multiple displacement events between 1960 and 1990 with the construction of Interstate 5 through the heart of the neighborhood as well as wholesale destruction of hundreds of homes to make room for the Memorial Coliseum and various other urban renewal projects. Gentrification in Portland saw a mass displacement of Black households from Albina, largely to East Portland, a suburban area that was unincorporated...

Will Automated Vehicles Cut Parking Revenue? Not Overnight, but Cities Should Plan Ahead

Autonomous vehicles (AVs) will challenge cities in ways that are difficult to fully predict, and yet critical...

Kayla deHoop recently completed her bachelors degree in Civil Engineering at Oregon Tech and is currently a masters student. Her graduate project will focus on the safety impacts of raising the speed limit on rural two-lane highways in Eastern Oregon. During her time at OIT, she has been actively involved in many of the engineering student clubs on campus including the American Society of Civil Engineers-Associated General Contractors (ASCE-AGC), Institute of Transportation Engineers (ITE) and Tau Beta Pi. Kayla has also had the opportunity to hold several internships in the transportation field including working with ODOT and WSDOT as a field intern on highway reconstruction and paving jobs and Kiewit Infrastructure Engineering as a roadway design intern.

I grew up in Klamath Falls, Oregon on a dairy farm and didn't really consider engineering until my senior year of high school. I took a personality and placement test and several times civil engineering came up as the top career for me, so that is what I pursued and I am so glad I did! At Oregon Tech I have become very involved with many student clubs including ASCE-AGC, ITE, and Tau Beta Pi, often taking on a leadership...

The National Institute for Transportation & Communities (NITC) research consortium, led by Portland State University, has awarded $1.14 million in total funding for eleven research projects spanning five universities. This year we focused funding on disaster resilience (including transportation in the era of COVID-19) and improving mobility in marginalized and underserved communities. Several projects examine how emerging technologies can be leveraged to create safer, more sustainable transportation systems for everyone.

Understanding Connections Between Mobility, Transportation, And Quality Of Life In Refugee Communities In Tucson, Arizona ($101,839
Led by Orhon Myadar, Maia Ingram, Nicole Iroz-Elardo and Arlie Adkins of the University of Arizona

Data-Driven Optimization for E-Scooter System Design ($67,619)
Led by Jianqiang Cheng and Yao-jan Wu of the University of Arizona

Understanding the Mobility Impacts of Decentralizing Homeless Services on Mobility in Salt Lake City ($100,206)
Led by Sarah Canham and Ivis Garcia of the University of Utah

Last year, Portland State University’s Transportation Research and Education Center (TREC) released a 130 page evaluation comparing equity-oriented programs from over 70 U.S. bike share systems across the U.S. Bike share being a relative newcomer to the transportation system, the research team was not surprised to find that approaches to equity programs ranged widely. In the latest installment, funded by the Better...

Cameron Kergaye is Director of Research & Innovation at the Utah Department of Transportation where he has nearly thirty years of project engineering experience. He was the Quality Manager for Utah’s $1.5 billion design-build project completed on time for the 2002 Winter Olympics. Cameron is a Professional Engineer in the State of Utah and a Project Management Professional with the Project Management Institute. He holds a PhD in civil engineering from the University of Utah with a research focus on adaptive signal control, traffic simulation studies and transportation system...

The National Institute for Transportation and Communities (NITC) is proud to introduce our four Summer 2020 Dissertation Fellows, together awarded $60,000 in total funding. Read about their projects below, or learn how to apply for funding through the NITC Dissertation Fellowship Grant. 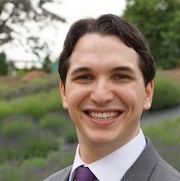 Robert Hibberd is a Ph.D. student and Graduate Research Assistant in the University of Arizona's College of Architecture, Planning & Landscape Architecture. His research emphasis is on urban and transportation planning, demographics, Smart Growth and New Urbanism, housing affordability issues, and sustainable development. He has worked on multiple NITC projects including LRT/BRT/SCT/CRT Development Outcomes FINAL PHASE and Updating and Expanding LRT/BRT/SCT/CRT Data and Analysis with his advisor, Dr. Arthur C. Nelson. He is a 2020 NITC dissertation fellow.

Robert E. Hibberd grew up in Syracuse, Utah, north of Salt Lake City. He received a bachelor’s degree in history from the University of Utah, and a Master’s degree in Historical Resources Management,...

Steering New Mobility in the Right Direction: Matching the Speed of Technology with the Speed of Local Government

Photo by Cait McCusker
Matching the Speed of Technology with the Speed of Local Government: Developing Codes and Policies Related to the Possible Impacts of New Mobility on Cities
Marc Schlossberg and Heather Brinton, University of Oregon

Advances in transportation technology — e-scooters and bike share, Lyft & Uber, and autonomous vehicles — are beginning to have profound impacts on cities. New mobility is changing not only how we travel, but also urban form and development itself. In the near future, we can expect differences in what public transit looks like, the layout of cities, and the places we spend our time. In turn,...