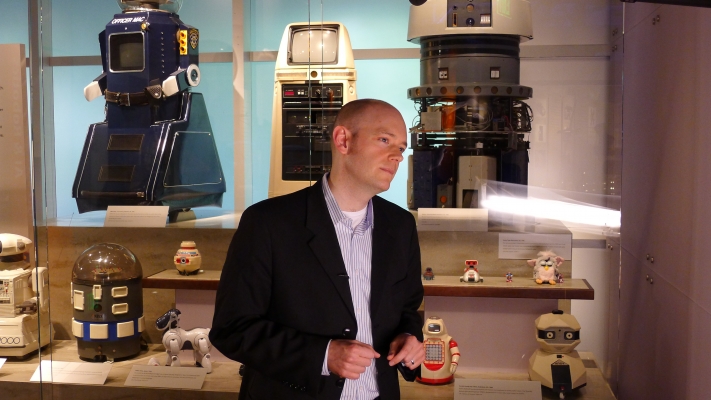 For someone who refuses to make predictions, Brian David Johnson has a long list of examples of how the future he envisioned came true.

It’s his job, after all.

As a futurist, Johnson helps organizations imagine what they’ll be doing 10 years in the future and then models the steps they’ll need to achieve that vision.

Johnson will describe his work, and offer insights relevant to transportation professionals, as the keynote speaker at the Transportation and Communities Summit Sept. 9 at Portland State University.

Transportation figures heavily into both popular visions of the future and Johnson’s work—but not in the same way. “Cities and transportation and infrastructure are some of the most important parts of futurecasting”—Johnson’s name for this method of modeling—he said.

Although audiences raised on jet pack-based transportation science fiction don’t welcome this message, “the cities of the future are going to look like the cities of today,” Johnson said. “It’s one of the most unpopular things I tell people.”

But consider the alternative. “Culturally, we value the past, and our future will look a lot like that,” Johnson said. “I don’t think that’s a bad thing. ‘The Jetsons’ is a sci-fi dystopia.”

Finding a future that looks like the present, or even the past, is a surprising theme in Johnson’s work, which has included consulting for firms such as Intel and trade organizations, governments and militaries. He currently holds an appointment as Futurist in Residence at Arizona State University’s Center for Science and the Imagination.

Advances in transportation technology show some promise to Johnson, but that’s a future too near for his focus. Looking out farther than a decade passes over the next big thing to see the thing after it. “A lot of what I’m working on is what comes after the internet of things, after smart connected cities, what comes about after that.

“So when you apply that today, everything we do is about people. What do we value, culturally.”

Transportation investments that last decades or even centuries reflect a community’s values and priorities, whether it’s a road network or a bridge. Johnson cites Portland’s Tilikum Crossing bridge, which accommodates many modes but shuns private automobiles, as an example of people choosing a different, yet familiar, future.

“Transportation isn’t the unimaginable future,” he said. “Human beings move; it ties into something deep we value.”

After a period of rapid changes in transportation, the last 100 years have been more a century of refinement, Johnson said. He jogs on roads with old buried trolley lines while other roads sprout new rail lines.

Transportation advancements succeed where they recognize and serve our shared humanity. “We build our future every day by the actions of people,” he said. “Those specific decisions are played out in our infrastructure.”

So if Johnson is looking 10 years or more into the future, what was he looking at a decade or two in the past? Well, in 1994, he said people would be using the internet to watch television. In 2005, he envisioned screens everywhere in sight.

But even in his technological vision, the gadgets are secondary to the people. “I said we would have screens everywhere, on our walls, our pockets, on our desks. And, most importantly, that these screens would be sufficient to connect you to people you love.”

Visit the Summit webpage, or click here to register for the Summit.