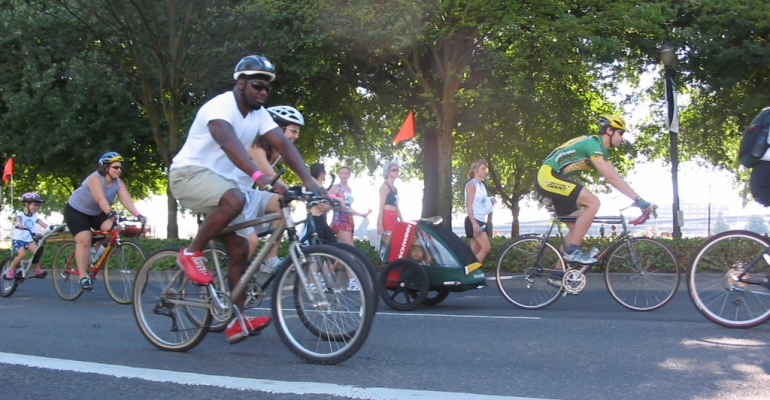 Everyday cycling for transportation can have positive, population-level health impacts. Significant deterrents to cycling remain, however, particularly for women and minorities.

Narratives of Marginalized Cyclists, a NITC project conducted by Amy Lubitow of Portland State University, explores the experiences of women and minorities biking in Portland, Oregon.

Lubitow interviewed 28 Portlanders who self-identified as a woman or as a racial/ethnic minority (or both), and based on the insights gained from their stories, came up with a set of recommended interventions for planners to mitigate the barriers they experience.

"Institutionalized racism and sexism is hard to fix. These are complicated issues that involve multiple levels of interventions, but at a basic sort of smaller scale, there are things we can do," Lubitow said.

She chose participants who own a bike and ride it at least once a month, but not more than once a week. The primary aim of the project was to collect rich, narrative data regarding obstacles to routine or utilitarian cycling for women and minorities who already see biking as a viable form of transportation, but who make relatively few bike trips.

The interviews yielded a wealth of perspectives.

For women in the study, riding a bike could oscillate between being empowering in one moment and stressful or frightening in the next. On one hand, they might experience a sense of agency with the speed that a bike provides for escaping perceived or blatant threats, while on the other hand they often reporting feelings of anxiety and fear due to the fact that, as a woman on a bike, they were noticeable in public spaces.

Carol, a Latina woman, used the metaphor of a woman’s mental "map" to highlight what most women participants felt about avoiding cycling in certain areas.

"I think bicycling at night I'd have to turn on that female sense of like, there's a map of the city and then there's a lady's map of the city, which is like you shouldn't go…there at night. And maybe why I choose to drive is because it's being able to say I don't have to pay attention to that. I can go where I want," Carol said.

In addition to worrying about being safe where they ride their bikes, women spoke repeatedly about their increased visibility while biking.

For many women, being a woman on a bike might draw additional attention from men in cars or on sidewalks. Women reported that biking routinely elicited catcalls and other forms of harassment from men.

Additionally, being a parent created challenges in biking. Participants who were parents often had difficulty finding time to use their bicycle given competing demands on their time and energy, and their frequent need to make multiple stops for child-related or household work such as grocery shopping. While things like showers, bike lockers and changing rooms could help to encourage some women to bike to work, Lubitow believes it is likely that the most critical changes must take place at a social and cultural level.

She suggests that bystander intervention trainings to reduce street harassment would be useful, as would increasing opportunities for women to build confidence biking through things like women’s bike clubs and riding groups, events for families, and training classes to empower women to repair and adapt their bikes as needed.

Of the 28 participants included in this report, 18 identified as a racial or ethnic minority. Many people of color reported feeling anxiety regarding systemic forms of racism. These issues ranged from concerns about police violence to challenges in maneuvering through public spaces. Janae, an African-American woman, discussed her concerns at great length.

"I don’t ride at night because of police officers, and possibly getting stopped, and possibly getting shot, so, that’s really the bottom line to be honest… I know when police pass me, I immediately make sure, I just see myself doing inventory: I’ve got my lights, got my helmet, everything’s to where they can’t find a reason to pull me over. And I’ve even been stopped and asked if my bike was stolen because it’s a high-end bike," Janae said.

Miguel, a Latino man, reiterated Janae’s point that moving through space as a visible minority requires additional thought and restraint over one’s movement. "People who [are] not white experience so much in their bodies, in their physical safety, and we [as minorities] learn at a really young age to not make our lives more in danger than they already are," Miguel said.

As a result of this anxiety, some individuals reported curbing their cycling habits.

Needless to say, interventions to address systemic racism and violence against minorities do not have easy answers. There are, however, certain concrete steps that planners and other transportation professionals can take to address these problems.

"Representation is really important. Having events in all different kinds of neighborhoods, not just in the downtown area. Those are low hanging fruits," Lubitow said.

Increasing the visibility of women and people of color in signage and other materials promoting cycling is one low-hanging fruit that could have big impacts.

"Representation is everything. I tell my kids that, I tell everybody that...representation is a big thing, and I think that if people saw more people of color riding bikes, that would encourage them," one African-American participant said.

People of color in this study noted that the lack of representation of minorities in signage and in biking events made it difficult to feel at home as a minority biker in Portland. Participants overcame many of these obstacles because of their own personal desires to bike, but for many people of color in Portland, these challenges may be significant factors in deterring them to even consider riding a bike.

For a more detailed look at the potential interventions and what transportation professionals can do to help encourage women and minorities to cycle more, take a look at the full final report.

Lubitow will present findings from this and her related research in an online seminar on May 19.