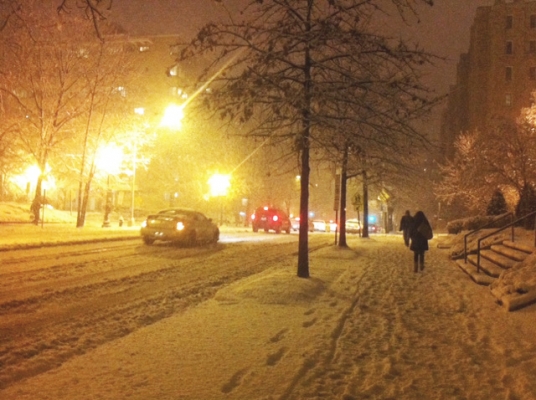 Connecticut Avenue gets more feet and fewer tires after a snow Wednesday.

Not everyone who attends the Transportation Research Board’s annual meeting in Washington, D.C., stays until the end. This year, many who planned to leave before Thurday’s sessions just couldn’t pull themselves away.

With fresh snow quickly coating the capital region, flights were canceled and delayed while other traffic came to a standstill. Even the annual meeting’s internal transportation system ground to a halt, as shuttle buses between the three conference hotels stopped running. The Capital Bikeshare program that had served attendees so well on a tour of the district earlier in the week shut down for the weather.

Conference attendees got their exercise walking between hotels, and stopping for snowball fights along the way. Others, with an unplanned night in town, gave more business to District bars.

Along the way, a conference dedicated to the multitude of transportation modes ended up highlighting the original: walking. “Turns out I actually walked 6.3 miles (or more) yesterday,” Richard Moeur, a Phoenix-based traffic engineer, wrote on Twitter. “Need snowshoes!”

Jennifer Dill, OTREC’s director, said the streets in the District’s core were clear by Thursdsay, although the scene Wednesday night was chaotic. “The snow does shut down Washington,” Dill said. “Buses were getting stuck going uphill. There was a big line for taxis.”

The change in weather did make some conference-goers feel a bit overdressed, Dill said. “When you’re in the conference rooms in the hotel all day, you have no concept of what’s going on outside,”

she said. “Then you come out and realize it’s been snowing.

“But it was fresh snow, so it wasn’t too bad to walk in. Even wearing a skirt and heels.”

The dressy trek wasn’t the most out-of-place sight, however. “We saw a guy last night with a surfboard,” Dill said. “I think he was going to try to use it as a sled.”