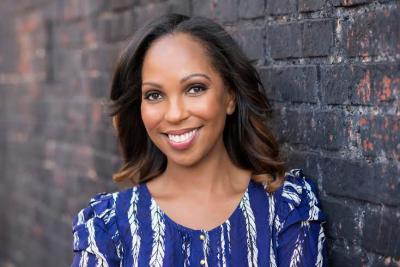 Vanessa Garrison didn’t set out to build a health movement. Growing up in Seattle’s Central District, a historically black neighborhood, Garrison just wanted her household and her community to be healthy.

“It was a challenge for me to develop solutions that work for the women I love,” Garrison said.

Those solutions, however, did set off a movement: GirlTrek, a community-based walking movement that has reached 250,000 black women and girls across the country. Garrison co-founded GirlTrek and serves as its chief operating officer.

> Garrison will tell her story at the Ann Niles Active Transportation Lecture Oct. 19 at Portland State University. Reserve a space if you plan to attend.

“Seattle is one of the most active cities in the country, but my household was completely inactive,” Garrison said. “All the women in my family were really experiencing health challenges due to chronic disease.”

Those problems ran deeper than simply inactivity. Obesity and inactivity often have roots in concerns about safety and other community issues built on historical trauma and systemic racism. A fitness-only approach, Garrison reasoned, would fail to overcome these powerful forces.

With friend Morgan Dixon, who would become her GirlTrek co-founder, Garrison took inspiration from liberation movements over the years. Harriet Tubman, especially, was a model.

“In our solution, we chose walking, not primarily because of the physical benefits but because it’s something that, throughout history, in the black community, has been really effective for mobilizing people for change,” Garrison said.

“Harriet Tubman walked herself to freedom, to liberation.”

The examples were everywhere. The Montgomery bus boycott, in which walking proved a conspicuous fulfillment of the pledge “We will not ride.” The powerful marches throughout the Civil Rights Movement. Gandhi’s Salt March. The Soweto uprising against the racist South African government.

“We approached it from that lens,” Garrison said. “And then we saw the impact of walking on obesity and anxiety. It was this super powerful activity: it’s affordable, it’s accessible—and we thought ‘we’re really onto something!’ ”

In 2011, Garrison and Dixon sent an email to 100 friends and family: we’re going to start walking for 10 weeks. Join us and we’ll send you motivating messages each Monday.

They finished with a plea: “Don’t let this movement stop in your inbox. Forward this to someone you love.”

Garrison and Dixon had tapped into something. “At the end of that 10 weeks, the number of emails and phone calls we got was so overwhelming,” Garrison said. “Women were in tears, telling us this was the first time in their life they had stuck to something, that their doctors had been telling them for years that they’re going to die if they don’t do something.”

Garrison and Dixon weren’t prepared to respond to this outpouring. “We said ‘Whoa! This is too much information. We’re not doctors!’ ” Garrison said.

Both had other jobs. “But we also felt we had a moral responsibility. This is a sign that the need is so much bigger than we realized.”

Neither knew of existing walking advocacy organizations to turn to. “It’s actually one of the problems,” Garrison said. “For all the best intentions of the ‘walking movement’ space, the people in our communities don’t know it exists.”

So they started with their communities, and from scratch: how do we meet and connect with people so this doesn’t feel like just another program?

Each month, GirlTrek unveils a high-visibility, themed walking campaign based on black history and culture, making it easy and fun to join in. Then they train women to be leaders, first on walking teams and then as community organizers.

As GirlTrek groups organize around content relevant to their communities, the groups look dramatically different from one place to the next. “That’s the heart and soul of GirlTrek,” Garrison said.

“The women in Chicago are motivated by the bigger issue of gun violence in their community and how coming together makes their streets safer. Jackson (Mississippi) is very faith-based and people are walking after bible study and church. GirlTrek tells them their body is a temple and walking honors this temple God gave them,” she said.

The Washington, D.C. group gets deep into legislative politics. The Oakland, California group draws on that city’s activist history.

So far, more than 75,000 women have taken the GirlTrek pledge to start walking in their neighborhoods. The bigger number, 250,000, have connected through social media. Garrison has set a goal of inspiring 1 million women by 2018. She also aims to see walkers make a habit of walking by completing at least three monthly challenges.

Garrison hasn’t forgotten her own family. “The hardest thing you can actually do is to convey to the people around you to change their behavior,” she said. “In doing that, most people sabotage their own personal health.”

There, again, she has Harriet Tubman as a guide.

Tubman had earlier found an escape route from slavery and tried repeatedly to convince her husband and two of her brothers to join her. “Eventually, she did the smartest thing any woman can do,” Garrison said. “She left by herself.

“All around you are super negative influences, whether they realize it or not, and you have to make the super hard decision to leave those people behind.”

But Tubman’s story doesn’t end with her escape. “Why she’s famous is she started to go back,” Garrison said. “She got her family.”

Understanding that history, each pledge to walk, each community gathering, each woman starting to identify as a healthy black woman, carries the symbolism of crossing the Mason-Dixon line.

“Every single day, we bring more family members across the health line.”

RSVP now to reserve a spot. More information on the talk is available at the Ann Niles Active Transportation Lecture page.