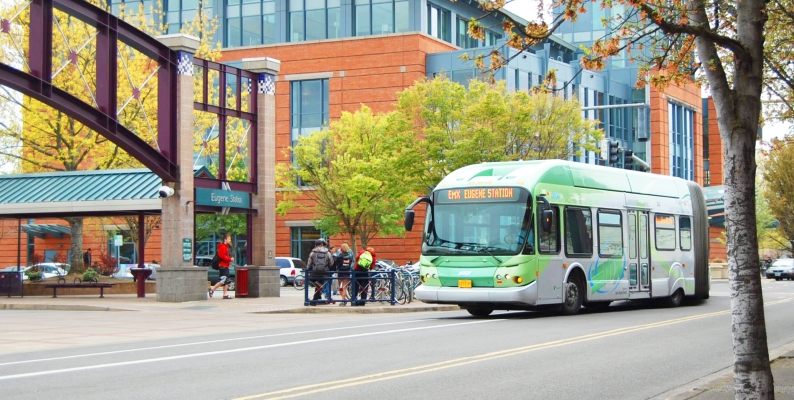 An EmX bus in Eugene, Oregon, leaves the station. The system was one of many nationwide studied in a far-reaching NITC report on the development effects of bus rapid transit systems.

Painted as the “next big thing” in transit, bus rapid transit systems have the luster of a new concept -- and the lack of research literature to match. A NITC research project set out to change that, producing a far-ranging research report delving into the influence of BRT on jobs, housing and development.

Led by Arthur C. Nelson at the University of Utah’s Metropolitan Research Center, the project, “National Study of BRT Development Outcomes,” looked at systems around the country, finding evidence that BRT systems influence development patterns in important ways. The research found that BRT systems are tied to positive outcomes for development and job location, although not necessarily changes in population or housing.

Bus rapid transit systems hold the promise of bringing communities some of the positive outcomes traditionally associated with light-rail transit systems but at a lower cost. The research will be of interest to planners and policymakers, who have increasingly turned to BRT as a viable option where other options might be impossible or infeasible.

Among the key findings:

•    BRT corridors increased their share of new office space by a third
•    Multifamily apartment construction near BRT doubled its small share
•    BRT influences employment change in only the manufacturing sector
•    There is an office-rent premium for being within a BRT corridor
•    During the economic recovery, BRT station areas saw the largest positive shift in the share of upper-wage jobs
•    High-quality, technically advanced BRT systems enjoyed better population and housing outcomes than lesser systems

Nelson will present his research in a Webinar Monday, Jan. 25. He presented his findings Tuesday, Jan. 12 in a Washington D.C. forum co-sponsored by the NITC program, Smart Growth America, and Transportation for America.

Project co-investigator Joanna Ganning also presented findings from this report at the national meeting of the Transportation Resarch Board.

Read more of our TRB coverage, including a guide to all NITC-affiliated presentations.

Register here for the Jan. 25 Webinar. More details are here.