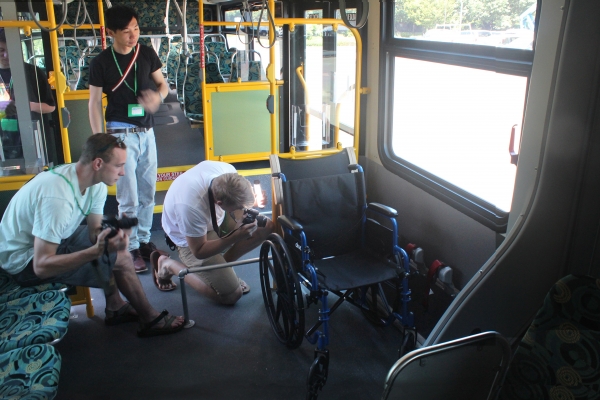 University of Oregon students test a wheelchair restraint prototype on a Lane Transit District bus as part of a NITC project to address concerns of older riders. The work will be presented Jan. 9 at the annual meeting of the Transportation Research Board.

The final report on this research is available now: Design for an Aging Population

Published in April 2017, this study sought to increase understanding of the obstacles faced by people with impairments in vision, hearing and/or mobility, which are common issues for older people, and generate physical product solutions.

The research shows that aging riders face conceptual, physical and social barriers that impact their willingness to use buses. Using the bus was seen as inconvenient, time consuming, physically draining and potentially frustrating. Priority seating areas designated for older and disabled users fill quickly. People with mobility challenges may use bulky walkers and require the availability of grab bars, and users of wheeled mobility devices need different device security. Several situations noted in the study show that physically challenged riders are subject to awkward, uncomfortable social dynamics more than other bus users. Innovation in easy access seats and secure WhMD stations at the front of the bus are critical for older users, as it makes riding the bus less draining and more safe.

This research was presented at TRB's 2017 annual meeting. See below for our coverage of the research at TRB.

Seniors make up a large percentage of transit riders, yet their experience isn’t always comfortable or convenient. Researchers from the University of Oregon sought to address those problems from a product design perspective.

Their work was accepted for presentation at the annual meeting of the Transportation Research Board in Washington, D.C. Learn more and download our guide to the conference.

Working with the local Lane Transit District, Faste and the student researchers surveyed and interviewed bus riders, held focus groups, accompanied riders on trips and rode as observers. They found that older riders faced obstacles every step of the way: from reaching bus stops to finding seats and riding, to ending their rides. Those obstacles vary between riders and whether they use a walker or wheelchair or have sight, hearing or other disabilities.

Sometimes the needs of riders conflict, Faste pointed out. A wheelchair user may want to find seats lifted and out of the way upon entry, while other riders may want a seat lowered and ready for them.

Broadly, Faste found that different groups on a bus—drivers, elderly riders, wheelchair users and able-bodied riders—expect different things from the other groups. When those expectations aren’t met, order breaks down and people get frustrated. (He diagrams this on Page 9 of the paper).

Bus drivers might typically help secure and release wheelchairs as needed. But other duties can intervene, changing the dynamic, Faste said. 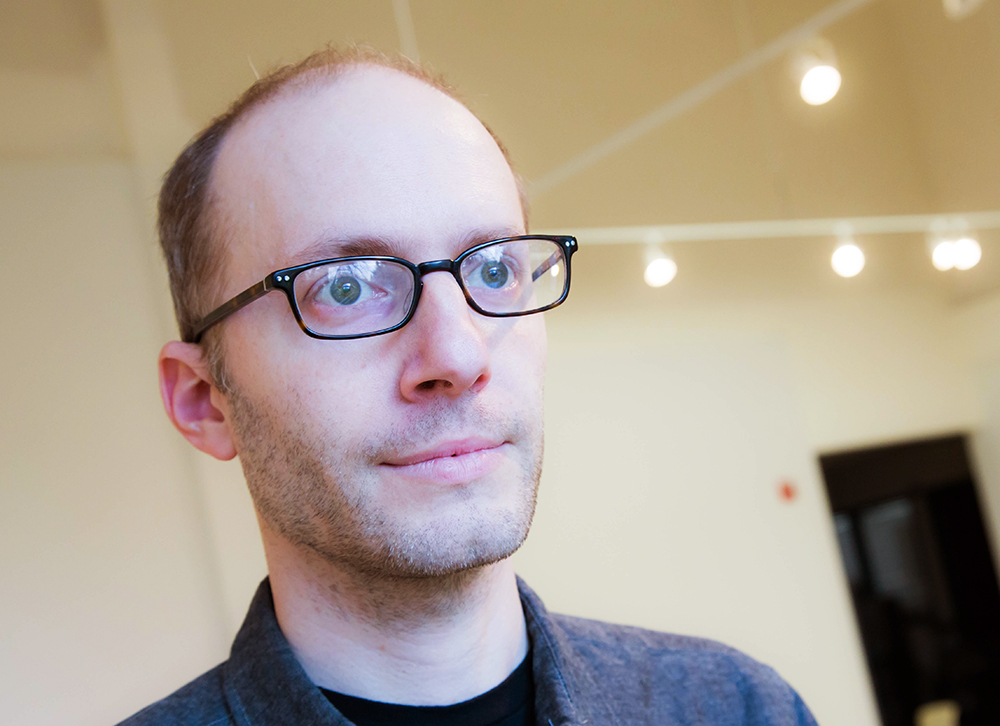 When you see someone waiting to get unlatched and they can’t reach the buckle, they have to interact with someone they don’t know,” he said. “The bus driver is just waiting because they’re busy and he hopes that someone else will help.”

After poring through the research, Faste’s Senior Design Studio students developed designs to improve the experience. One design addressed multiple concerns older transit users expressed, despite not being part of the bus in any way.

The product, a walker, features a suspension designed to cross bumps and gravel on the way to the bus. On the bus, the walker tucks in over the rider and partially under the seat. This solves problems for several user groups: the walker user takes up only one seat, leaving adjacent priority seats open and accessible; the walker doesn’t require stowage in a designated area, with other riders needed to escort the walker user to a seat; and the walker can be used to help the rider out of the seat, leaving seats with lift bars free for other riders.

Another design integrates wheelchair latches into seats, in contrast with the separate systems on many buses. The seats in this design flip up to reveal a wheelchair locking bracket. A universal latch could then let wheelchair users attach to any seat on the bus.

Of course, no two transit districts are alike, and vehicles and systems vary widely. But just as professional transit designers consider whether their designs work well with existing, and expected, systems, Faste challenged his students to develop products that complemented their colleagues’ designs.

“I was happy with the way they were working together to make something that isn’t just ‘Here’s a beautiful seat,’ but to come up with a way that it could also work with the other systems.”

The goal, Faste said, is making the bus better for riders, not merely checking off an accessibility requirement. “It’s easy to say, ‘We already have seats that flip up and down.’

“It’s true; they do exist,” he said. “But even though they go up and down, sometimes they’re really heavy and sometimes it’s not clear how they unlock or decouple.

“So can ask if we can make them even better and say here are some benefits that play into that conversation.”

Finally, aging people who have begun to rely on transit as their driving abilities diminish may have mixed feelings about the bus. Faste urged his students to think about how aesthetics can subtly influence those emotions.

“It could make a difference,” Faste said. “You want it to be a pleasantly better-than-you-expected experience when you transition onto the bus.”