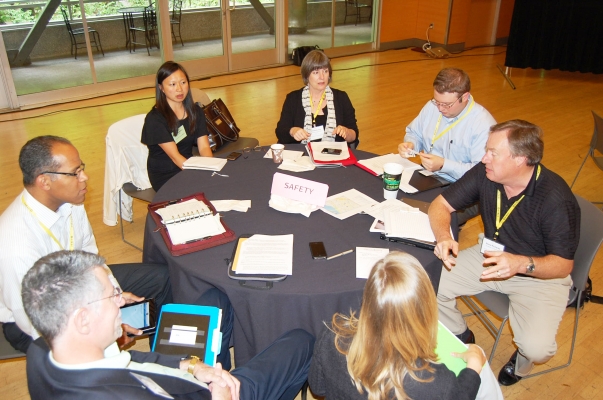 For many people, the conference provided the first opportunity to visit Oregon, and OTREC took the opportunity to share the state’s story of integrating transportation and land use. Rex Burkholder and Andy Cotugno with regional government Metro discussed how planning and policymaking dovetail with transportation in creating a livable region. Bob Hastings, agency architect with TriMet, described the transit agency’s sustainability initiatives. Lidwien Rahman with the Oregon Department of Transportation detailed the codes that provide a backbone for transportation and land-use planning.

OTREC Director Jennifer Dill moderated a panel on the role of university transportation research. Starr McMullen, an OTREC researcher at Oregon State University, discussed the potential effects on the economy and livability in switching from the gas tax to a vehicle-miles-traveled fee. Robert Liberty with the Sustainable Cities Initiative, one of three OTREC initiatives, spoke of the land-use and transportation battles that laid the groundwork for Oregon’s sustainability efforts.

OTREC researcher Rich Margerum of the University of Oregon shared regional transportation and land use decision-making case studies in San Diego, Denver, the Puget Sound region and Portland. Margerum moderated a panel on how regions across the country can coordinate their planning efforts. Jill Hough of North Dakota State University gave a rural University Transportation Center perspective while Jarrett Stoltzfus of the Federal Transit Administration provided the national perspective.

Participants brought constructive and hopeful attitudes to the conference even though many of their centers will cease to exist in their current form. The U.S. Department of Transportation funds 59 centers in its University Transportation Centers program. That number will drop to 20 for the next federal fiscal year. Centers will compete against each other to win grants under the new program. During the conference, DOT officials took questions and concerns to incorporate into the request for proposals.

Transportation center officials made the most of the information they had at the conference, including indications that the new centers would be consortia of two or more institutions. On June 14, center officials met in groups to explore the possibility of combining their centers. They gathered around tables at Portland State University’s Smith Memorial Student Union Ballroom corresponding with each of the DOT Secretary’s strategic goals: safety, economic competitiveness, environmental sustainability, state of good repair and livable communities.

Whether those conversations blossom into new research centers will be determined in the months ahead. But feedback on the experience, and on the conference overall, was overwhelmingly positive. Participants expressed their appreciation for the organizers’ melding the Oregon experience into the program and the moments of levity throughout the proceedings. Those included a photo scavenger hunt of Portland attractions and oddities and a spirited round of Family Feud pitting teams from CUTC and the Research and Innovative Technology Administration against each other.

For more photos, view the slides below and visit the OTREC Flickr site by clicking here.