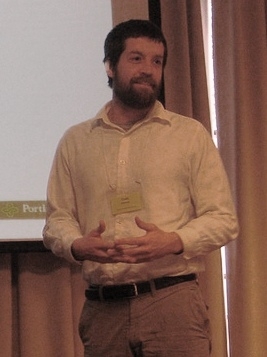 While the national parks system may have some of the most natural areas in America, there’s nothing natural about how most Americans travel through them: by car.

Todd Johnson, an OTREC graduate research assistant, is hoping to change that for at least one state park. The Eno Transportation Foundation recently chose Johnson for a year-long assignment to find ways to reduce traffic congestion at Arches National Park near Moab, UT.  Every year, Eno puts out five assignments throughout the country to improve transportation at national parks and monuments.

Johnson, a Master of Science student in civil and environmental engineering at Portland State University, previously worked as a transportation interpreter at Rock Mountain National Park, encouraging people to take a shuttle service rather than driving.  He has a similar goal for his stint at Arches.

“We want to get people out of their cars,” Johnson said. “Right now when the parking lots fill up, people park on the side of the road, creating a safety hazard and diminishing the beauty of the park. I will help with implementing solutions to deal with congestion using (Intelligent Transportation Systems) and social media.”

Johnson, an avid cyclist, will also be looking at encouraging alternative forms of transportation through Arches. The park is looking to construct more hiking and biking trails to prevent visitors from driving from one attraction to another, Johnson said. Currently, the park’s roads are notoriously narrow with no shoulders, making it difficult and dangerous for cyclists.

Though the park has done some research into congestion reduction and alternative transportation projects, Johnson’s role will be to bring them into reality. He will also work with the Utah Department of Transportation, Dept. of Federal Lands and other stakeholders to find common ground solutions to the area’s traffic problems.

“(The Park) are talking about these things but don’t have a driving force,” Johnson said. “I ride every day and encouraging more cycling through the park would be a thrill. I want to make events where you encourage families to cycle by closing down portions of the road.”

Last Sunday, Johnson flew to Denver for a week of training. This Sunday, he will make the long drive to Moab, where he will be living for the next year. The idea of living in a National Park for the next year is very exciting, Johnson said, but he will miss the lush greenness of Oregon when he is out in the desert.