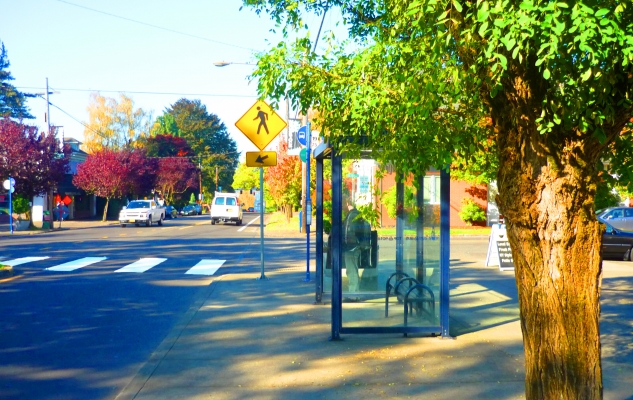 Traditionally, transit systems are thought of exclusively in their wholeness: how the system serves a region, city or community. In order to evaluate the quality and accessibility of transit from a livability perspective, researchers developed some micro-scaled measures of very localized conditions. These measures evaluate the ability for individuals to access individual points along the system.

Using the regression analysis results, researchers identified approximately forty stops that had unexpectedly high or unexpectedly low ridership for further investigation. They printed an aerial photo and street map of the area for each of these stops and visually examined the neighborhood’s connectivity, along with physical or spatial barriers that might prevent a pedestrian from reaching the transit stop easily. They also looked at the density of the surrounding area, and for any competing stops in close proximity.

In the urban form analysis, researchers found some potential barriers that can separate transit stops from the surrounding environment. These included freeways and other large roadways, city block structures that limit more direct access, walls that separate distinct land uses and limit pedestrian connectivity, and parking lots that create “virtual barriers” by creating unpleasant pedestrian environments. With such design, it is likely that only captive riders, rather than choice riders, would use transit.

Based upon these research findings, investigators identified three transit livability indicators that should be measured: transit quality, the built environment, and destinations (pedestrian-oriented destinations within one-quarter mile of each transit stop).

The investigators identified three key policy areas where both transit agencies and local or regional governments could bring about a more transit-supportive urban form. First, service frequency is clearly important. Holding all else equal in terms of urban form, transit ridership increases when transit service increases. Second, clustering of density and destinations at transit stops is important. The models developed from this research can be used to prioritize locations for changing land use based upon desired transit ridership. Third, connectivity is important, as measured both by GIS analysis of existing networks and urban form analysis of connectivity barriers. In terms of connectivity, researchers identified one overall area of importance: the area immediately adjacent to a transit stop must be pedestrian-friendly. Most transit users are pedestrians at the beginning and end of any transit trip. Therefore, focusing on the walkable zone around each transit stop was important.