Crosson and fellow researchers Daoqin Tong (Arizona State University) and Yinan Zhang (UA) conducted a flood vulnerability assessment of the City of Tucson, Arizona’s multi-modal transportation system in low-income and minority neighborhoods. They identified priority locations for Tucson to invest in improvements to mitigate urban transportation system flooding, and are now working with city and regional agencies to implement those findings. This project also serves as a proof of concept to advance national research methods aimed at reducing the mobility impacts of chronic flooding.

EFFECTIVE USE OF GREEN INFRASTRUCTURE IN LOW-INCOME NEIGHBORHOODS

Green infrastructure is a growing urban trend where stormwater is managed by expanding permeable areas of natural vegetation throughout a city. This approach to water management is intended to protect, restore, or mimic the natural water cycle. Crosson's research team found that building comprehensive neighborhood-scale green infrastructure in the right-of-way is effective at increasing multi-modal access in moderate flooding conditions.

This green infrastructure solution did not address the mobility issues that result from extreme flooding. Rather than municipalities selecting areas that have the highest volumes of flooding or the highest volume of resident complaints, funds for green infrastructure should be invested in low-income neighborhoods subject to moderate flooding in order to achieve the greatest improvement of multimodal access.

Of the areas studied, 93% were part of census tracts with median household incomes below the Tucson average. Researchers intentionally focused on low-income neighborhoods, since too often people living in those areas are hardest hit by the impacts of natural disasters. Previous research in this area has focused heavily on the vulnerability of the transportation infrastructure alone, largely ignoring the people in the communities. A NITC project funded in 2020 will develop a new methodology that incorporates community socioeconomic vulnerability in the evaluation of transportation infrastructure vulnerabilities for cities and regions facing hazards.

Stage One - Estimate Flood Conditions in Low-Income Neighborhoods: Researchers estimated flood conditions for a 5-year, 1-hour storm event (meaning a flood from a rainstorm lasting one hour, of a size that occurs roughly every five years) using FLO-2D flood modeling software and a digital elevation model constructed using LiDAR data. This hydrological analysis was performed both at the city-scale and at a 20-foot grid resolution.

Stage Two - Identify Multimodal Transportation Priorities: The team then analyzed neighborhood transportation vulnerability. Using the results from their flood model, they looked at overall transportation system performance across three modes (driving, bicycling and transit). Data from the most recent 10 years of vehicular counts, bicycle counts, and bus stop ridership were used to identify the top ten priority locations for flood mitigation, based where usage was highest for each of the three modes.

Stage Three - Perform Green Infrastructure Scenario Analyses: Lastly, they took those top ten sites for each of the three modes of transportation and performed thirty green infrastructure scenario analyses. They wanted to see the change in transportation network accessibility after the same flood conditions, but with comprehensive neighborhood-scale green infrastructure in place. To do this, they used ArcGIS Hydrology Analysis to find the "pour points," or places where water flows out of the area. Then they altered their model to include roadside basins (following design standards from NACTO and Pima County) to control this flow. 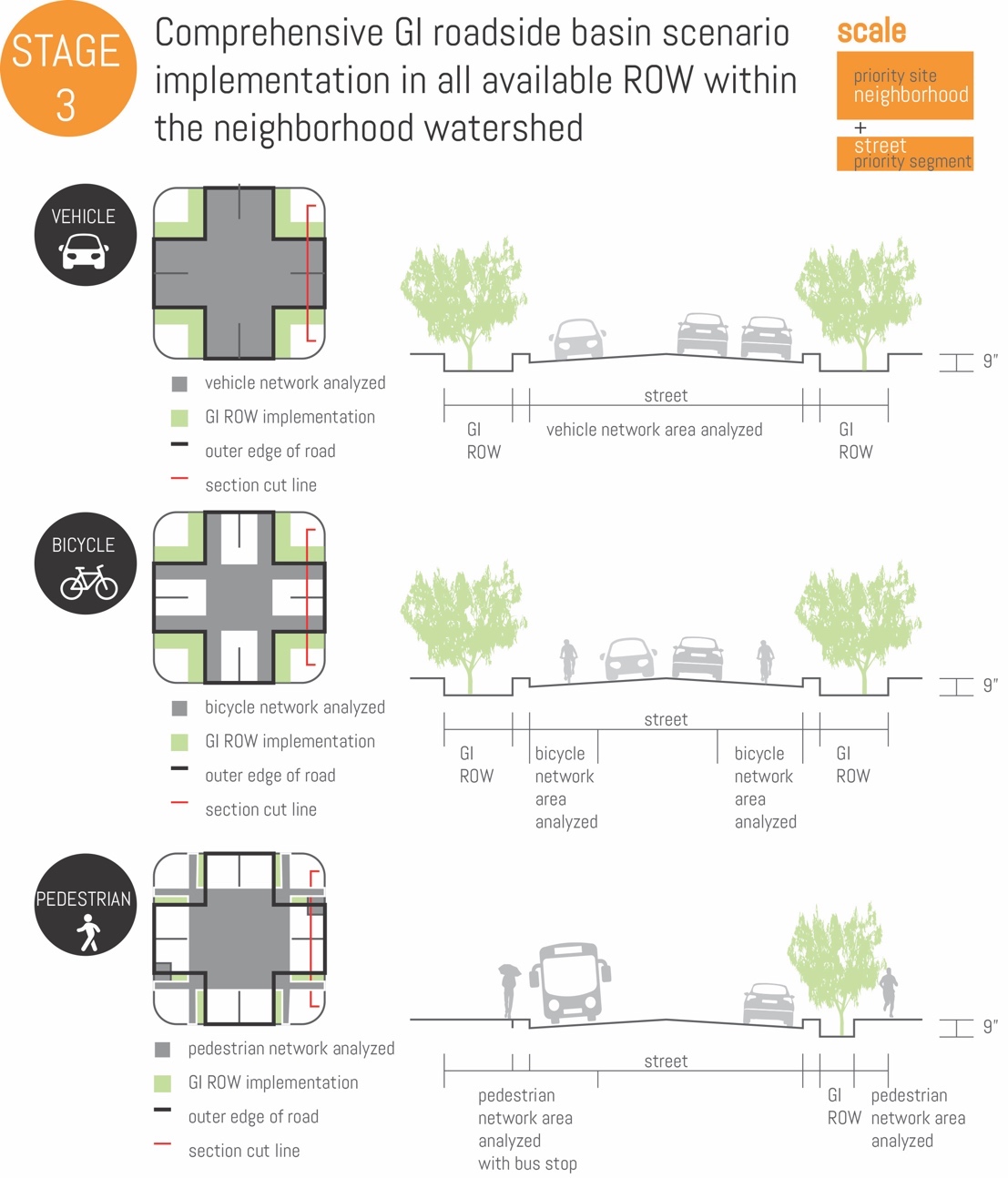 This figure shows typical roadside basin implementation for each mode of transportation.

These five principles can be used by transportation planners and engineers, hydrologists, flood managers, and urban designers when approaching and evaluating project sites and investments to maximize the impact on increased multimodal accessibility.

Prioritize Upstream Mitigation - Across the thirty scenarios, the priority segments with the greatest improved transportation access were in areas that had substantial upstream mitigation. This suggests that green infrastructure should not only be implemented directly adjacent to priority transit locations, but also (and sometimes more importantly) implemented upstream of the priority segment.

Prioritize Moderate Flooding - Across the thirty scenarios, the greatest impacts on improved transportation access were in areas that received moderate flooding, in comparison to areas of extreme flooding. Often municipalities and transportation agencies are motivated to place green infrastructure installations in rights-of-way adjacent to areas where there are the greatest flooding concerns and highest volume of resident complaints. But to help with extreme flooding, larger implementations (such as underground stormwater piping or large basins) would need to be implemented in concert with smaller investments. When budget is limited to neighborhood-scale investments, in order to visibly show an impact on reducing flooding and increasing accessibility to the multimodal network, moderately flooded sites are the best candidates.

Prioritize Network Gains - When selecting project sites, it is critical to consider the network gains that can be accomplished by concentrating the green infrastructure within an area. By addressing the flooding issue in one street or sidewalk segment, other downstream flooding concerns may be helped as well.

Prioritize Large Right-of-Way Areas - Across the thirty sites and segments, the largest impacts often occurred when there was a substantial amount of right-of-way available for implementation of green infrastructure. Taken into consideration with the other design principles, the area (and corresponding volume) of the available right-of-way can make a large difference in total flood reduction success.

Prioritize Pedestrian Travel Locations - The greatest impacts of green infrastructure on accessibility were in pedestrian access to bus stops. The width of these designated areas to mitigate were smaller in the pedestrian cases compared to bicycle and vehicle cases. Acting as a buffer between road and pedestrian walking areas, the green infrastructure most successfully supported greater access.

IMPLICATIONS FOR FUTURE RESEARCH AND PRACTICE

The research expects direct outcomes on future planning decisions made by the City of Tucson Department of Transportation, Tucson Water, Planning & Development Services, and Pima County Regional Flood Control District (RFCD). The NITC researchers on this project have met with the Director of Tucson Department of Transportation and RFCD, and the leadership of both agencies have expressed great interest in the research findings for upcoming decision-making around the allocation of green infrastructure funds for roadway flooding mitigation.

This research can serve as a proof of concept for a larger, long-term project to advance national research methods to reduce the impact of chronic flooding on the multi-modal transportation network. Future research should assess impact across time durations (rather than simple peak event calculations) and work to optimize green infrastructure implementation across multiple benefits for multiple modes of transportation (rather than individual modes).

By systematically prioritizing these projects in the right-of-way, cities can move toward increased transportation network accessibility and expanded equity.

This research was funded by the National Institute for Transportation and Communities, with additional support from Pima County Flood Control and Tucson Water.