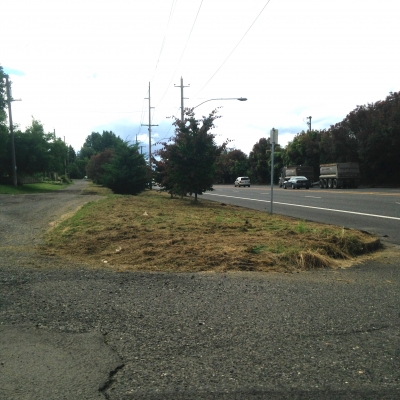 Prior to this project, Driessen, who is working toward a graduate certificate in Geographic Information Systems at PSU, was already collaborating with David Hampsten, a board member of the Hazelwood Neighborhood Association and member of the East Portland Action Plan, to help Prioritize Portland! – a coalition consisting of multiple organizations including the Northeast Coalition of Neighborhoods, OPAL, Verde and Oregon Walks – to create a multilingual survey about the community’s active transportation needs.

The survey, available in English, Spanish, Russian and Vietnamese, was mailed out to 58,000 east Portland residents in the spring of 2014.

Prioritize Portland! emphasizes the need to have a bottom up process for communities to identify and consolidate their priorities and communicate those to planners and policy-makers.

Many areas in the Cully neighborhood lack sidewalks, marked crossings, and pedestrian safety features such as curb cut-outs and lighting. The survey gave residents the opportunity to suggest improvements they would like to see.

The Cully Association of Neighbors worked with Driessen, Campbell and Montejo to schedule a pilot PPGIS exercise at their General Meeting on May 13th, 2014, where participants were asked to place circular stickers on large paper maps of Cully to identify deficiencies in the pedestrian network.

This participatory mapping exercise, the online map survey, and a block audit performed by the students made up the three primary datasets for the research project. They also used existing city data about the Cully neighborhood.

Through the use of PPGIS as part a public engagement process, students hoped not only to prioritize planning efforts by identifying the community’s needs, but also develop new engagement strategies, contribute to a culture of bottom up democratized planning, and discover firsthand what role GIS can play in public participation.

Shandas, who describes the students’ work as “exceptional,” approaches teaching through problem-based inquiry. He asks students to identify a pressing community problem and use their skills and knowledge to evaluate that problem, and the Engaging Cully project is a perfect example of students meeting that challenge.

A series of follow-up workshops is scheduled in the fall of 2014 to demonstrate the results of the participatory mapping exercise and conduct live network analyses of the proposed sidewalk and crosswalk projects in order to help identify community priorities.