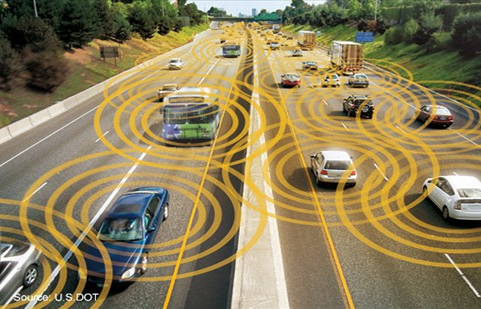 In this image from USDOT, a world connected with real-time, up-to-date transportation data is visualized.

The quality of OTREC research has recently been recognized on a national level.

The US Department of Transportation has released the first version of this platform, called the Research Data Exchange, which collects and publishes archived and real-time transportation data from multiple sources.

In the language of their home page, the Research Data Exchange (called the RDE for short) was primarily developed to “support the development, testing, and demonstration of multi-modal transportation mobility applications being pursued under the USDOT ITS Dynamic Mobility Applications (DMA) Program and other connected vehicle research activities.”

In other words, USDOT created this database so they could use it. But – in the spirit of collaboration common to those with an interest in collecting and managing vast amounts of information – they’re sharing it.

The RDE is free and open to the public. Registered users can make comments and ask questions about the content, and recognized contributors are able to submit new research projects. It is hoped that the ongoing growth of the database will contribute to its usefulness for everyone involved.

As of now, there are nine data environments in the RDE, and one of them is from PORTAL.

Two months of freeway and arterial data from Portland, Ore, taken from PORTAL, was chosen for inclusion. The Portland region was one of three regions in the US to be selected, along with Seattle, and Pasadena, Calif.

PORTAL is a robust archive containing transportation data for the Portland-Vancouver metropolitan region. It was developed at Portland State University and supported in part by grants from OTREC.

In order to create a “system of systems” of interlocking data environments, USDOT intends to acquire data for the RDE from multiple archives like PORTAL.

All data included is first assessed for quality, then thoroughly catalogued and described in metadata for easy searchability.

In later releases of the RDE, as the platform becomes more thoroughly developed, there are plans to include a Data Forum. Contributors of data will then have the right to go in and respond to content in the Forum that identifies anomalies, inconsistencies or other potential errors in the use or application of their contributed materials.

In this way, researchers working in similar fields could have real-time conversations in which they update their own and each other’s work, finding errors and connecting the missing information.

The PORTAL archive was put together by students and faculty in the Intelligent Transportation Systems Laboratory, under the guidance of PSU professors Kristin Tufte and Chris Monsere. It was founded by PSU professor Robert Bertini, who started the archive in 2004, and developed in close cooperation with OTREC, the Oregon Department of Transportation, Metro, the City of Portland, TriMet, the Southwest Washington Regional Transportation Council and other regional transportation partners.

In addition to OTREC funding, work on PORTAL is supported by grants from Metro and by the Southwest Washingtion Regional Transportation Council , the National Science Foundation, and the Federal Highway Administration.

The RDE can be found online here.