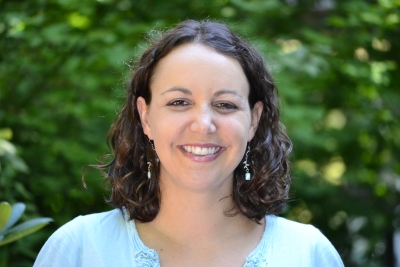 Rebecca Lewis and her University of Oregon research team present, "Reducing Greenhouse Gas Emissions from Transportation: Lessons from West Coast States" Jan. 12 at the annual meeting of the Transportation Research Board in Washington, D.C.

Lewis and her team present the research in a poster session Tuesday, Jan. 12 at the annual meeting of the Transportation Research Board in Washington, D.C. The team includes co-investigator Robert Zako and graduate students Alexis Biddle, Rory Isbell, Emily Kettell, and Elizabeth Miller.

“The states all started in the same place and have taken different directions,” Lewis said in an interview. Each state set greenhouse gas reduction targets of 50 to 80 percent below 1990 levels by 2050.

California put its metropolitan planning organizations, or MPOs, in charge of the effort to reduce driving and therefore emissions. The state Legislature also directed the California Department of Transportation to plan scenarios to reach greenhouse gas reduction targets.

The research team’s conference paper outlines each state’s approach. The NITC project, in progress, will give further details.

The three states, Lewis notes, are mostly on track to meet modest 2020 greenhouse gas reduction goals, but it won’t be clear for a while whether the climate action plans deserve credit for those drops. “It’s not been long enough since the plans went into effect to tell if it’s the plans or the broader recession and gas prices” that reduced driving.

Driving has already started creeping upward with improving economies. “It’s too early to tell whether the plans will have a sustained impact,” Lewis said.

Because the climate plans outlast any official’s term in office, sustained political support can determine a plan’s success. “A lot of these plans were passed under previous administrations,” Lewis said.

“It doesn’t vie well for having positive impact if there’s not sustained commitment.”

That commitment often takes the form of money, which comes back to political support, Lewis said. “It’s a matter of having the political will to pay for what they’ve put in the plans.”

For example, Portland’s MPO, Metro, adopted an ambitious strategy to meet emissions targets, relying heavily on greater investments in public transit. But Metro needs state funding, Lewis said. “If Metro had the money to put in, it would realize all these things. But they don’t have the money and that requires legislative action with citizen support.”

Thanks in part to this research, we know more about building that support. Focusing on emissions and climate change won’t inspire people to act, Lewis said.

“But if we frame it in terms of quality of life, it tends to have more resonance,” she said. “Talking about the benefits can build more citizen support.”

Examining the different approaches of these early-adopter states offers a wealth of lessons for future efforts, Lewis said. “We just wanted states to learn from each other what they’re doing so they can introduce policies to help reduce VMT and greenhouse gas emissions.

“No state’s doing everything right, so there’s a capacity for learning across the states.”