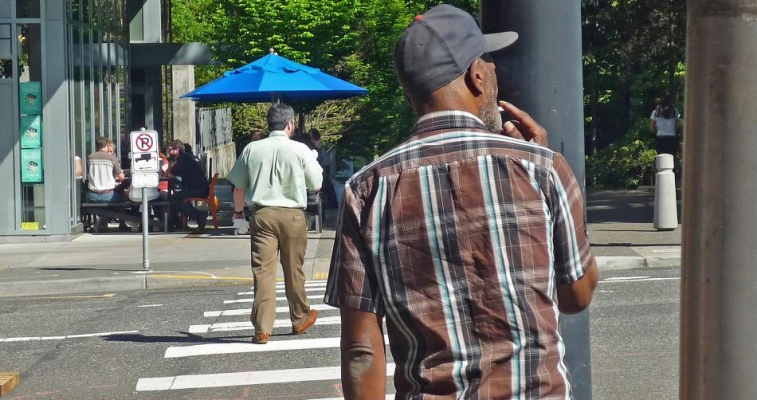 In a pilot study funded by the NITC Small Starts program, researchers explored whether drivers behave differently toward pedestrians waiting to use a crosswalk based on the pedestrian’s race. The study – the first examining the effects of race on pedestrian crossing experiences – found that black pedestrians were passed by twice as many cars and waited nearly a third longer to cross than white pedestrians.

Minorities are disproportionately represented among pedestrian fatalities in the United States. The Center for Disease Control reported in 2013 that in the first decade of this century, the fatality rates for black and Hispanic men were twice as high as they were for white men.

Researchers Kimberly Barsamian Kahn and Tara Goddard of Portland State University, and Arlie Adkins, of the University of Arizona, hypothesized that if minority pedestrians experience more delay at crosswalks, they might take greater risks when crossing – risks that could contribute to the disparate fatality rates.

Kahn, an assistant professor of social psychology, studies contemporary forms of racial bias that are hidden within society. Working with Goddard and Adkins, who were interested in the social equity impacts of transportation, Kahn put together a controlled field experiment to measure differences in drivers’ yielding behavior toward black and white pedestrians.

Research has shown that racially biased behaviors are evident in many parts of society, including education, employment, healthcare, and criminal sentencing. Kahn’s team posited that racially biased conduct may exist in the transportation arena as well, particularly when it comes to pedestrian-driver interactions.

Previous crosswalk studies have shown that driver yielding behavior changes based on social factors. Drivers have been shown to yield differently based on the relative ages of the driver and the pedestrian, the social class of the driver, and the apparent physical disability of the pedestrian (one study equipped pedestrians with canes, and drivers responded with quicker yielding and shorter wait times).

The research team’s experiment tested whether racial group membership might be an influencing factor as well. Like other types of interactions, they reasoned, roadway interactions between drivers and pedestrians are likely to be influenced by subtle racial attitudes and biases.

Implicit biases are subtle beliefs that individuals may hold beneath their conscious awareness, but that can lead to discriminatory behavior. In a fast-paced activity like driving, where decisions may need to be made in a fraction of a second, people's’ actions can be influenced by these subtle attitudes.

The study focused on the moment when pedestrians are most vulnerable: street crossings. Three black and three white participants were selected to be crosswalk pedestrians for the study.

Researchers chose an unsignalized, marked crosswalk, located mid-block so that drivers’ yielding wouldn’t be influenced by cross traffic or turning. It was on a two-lane, one-way street in downtown Portland, Ore.

All six of the pedestrian volunteers were men in their 20s, and were matched based on their height and build. They wore an identical outfit; a long-sleeved gray shirt and khaki pants, to achieve a neutral look without any obvious social or socio-economic characteristics.

Each pedestrian did 15 crossing trials. These trials resulted in 168 driver subjects.

In each trial, three trained observers stood out of sight of oncoming cars and recorded whether the first car to approach yielded, how many cars passed before someone yielded, and the number of seconds that elapsed before the pedestrian was able to cross.

As hypothesized, the results differed based on race: black pedestrians got passed by twice as many cars, and waited 32 percent longer than white pedestrians.

Researcher Goddard said she had expected to see some differences, but the stark contrast in experience between pedestrians of different races surprised her. “It’s amazing to look at something you thought might be subtle and to see it instead so clearly,” Goddard said.

On top of the more imminent safety concerns, unpleasant pedestrian experiences could discourage members of minority groups from using active travel modes in the long run. One question that the research team has identified for future research is whether planners can do anything to minimize this, for example by creating crossings where yielding is mandatory and not left to the driver’s discretion.

To expand upon this preliminary study, the researchers plan to collect more data on driver demographics, which this time were only collected for the driver who yielded. Future research goals also include testing these effects at different types of crosswalks and the inclusion of gender as a possible influencing factor.

More details about this study are on the project page.