Sustainable transportation class at University of Oregon is a success 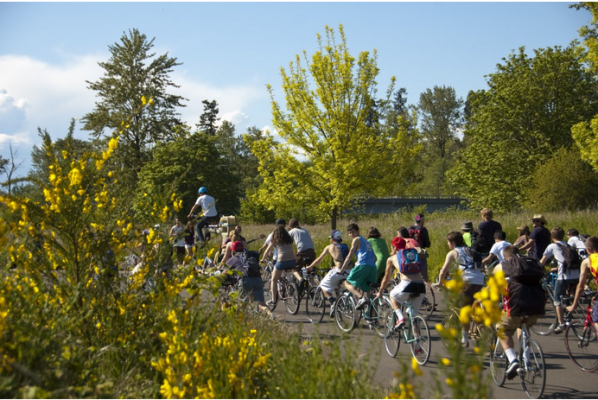 A new transportation class at the University of Oregon, launched in January 2013 and funded by grants from OTREC and NITC, by all accounts had a wonderful first term.

Conceived as part of the curriculum for the Oregon Leadership in Sustainability (OLIS) program at U of O, the course, titled Sustainable Transportation, will be a permanent part of the OLIS class roster and will be open to all graduate students at the university.

The class this winter, led by instructors Ann Scheerer and Larisa Varela, taught applied research in a real-world setting. Students worked on planning projects for the university and for its home community, the City of Eugene, Ore.

On March 20, 2013, U of O's Transportation and Livability Student Group, LiveMove, hosted a public event where students were invited to present their research and interested community members were invited to attend.

The day of the presentations in Eugene was exciting; the “icing on the cake” for Scheerer. Marc Schlossberg, OTREC/NITC executive committee member at U of O and faculty advisor for LiveMove, was there, and so were some professors from the planning department, staff from the sustainability office, and quite a few local transportation advocates.

Scheerer, a PhD candidate at the University of Colorado in Denver, came to Oregon to teach the course in January. Her background is in sustainable urban infrastructure, and her passion is to do applied research with students.

At the beginning of the course, students were given the opportunity to choose from a list of possible topics for their research. The six topics were: Reduction in Eugene Gas & Diesel Consumption, Impacts of Bicycling on the Eugene Economy, Eugene Development Requirements for Parking, University of Oregon Transportation Strategies and Goals, Bike Sharing Expansion Feasibility Study, and Pay-As-You-Drive Car Insurance.

U of O professor Vicki Elmer had made contacts with the university, the City of Eugene and the Lane Transit District to establish these research topics.

“Once the general topic was identified through Vicki, we met at the outset with the client to determine the exact scope of the work. It had to be something that could be done in ten weeks,” said Scheerer. “The bike sharing in Eugene, and doing the bike economy study, these were things that these agencies had on their list to check out, but they didn’t have the resources to take on this research. So it was kind of a win-win. The students did the research free of charge. Part of our training was to get the students to think about how to work with clients. We took a practical business approach.”

Clay Stillwell, a graduate student at UO, took the class and worked on the parking project which was eventually titled “Multi-family Residential Parking Requirements in the University Neighborhood.” He said that for him, the strongest feature of the class was how it let him connect with the people he'd be doing research for. "It was a chance for us to interface with our clients. The city wanted something usable, and we met with them... it was definitely more connected," Stillwell said.

Kacey Messier, who also took the class, agrees. "The biggest takeaway was the hands-on experience," she said, adding that the public presentations were also a positive experience.

The project Messier was a part of, "Bikes Mean Business to the Silicon Shire," went over so well that at the end of the presentation they were asked if they wanted to present their data to a larger audience of city officials in Eugene.

All of the projects were aimed at creating sustainable urban infrastructures, in line with Oregon's larger initiative of reducing greenhouse gas emissions.

“The Sustainability office at U of O has a Climate Action Plan, and the projects we pursued relate very much back to that plan,” said Scheerer.