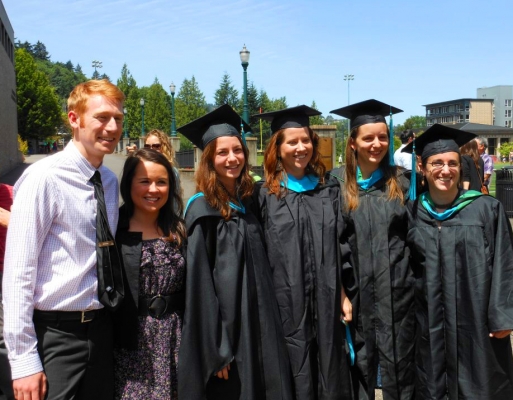 Six graduate students from the Master of Urban and Regional Planning program at Portland State University have been awarded a national prize by the American Planning Association.

The research team, working under the name Celilo Planning Studio, won the 2013 APA student award for Application of the Planning Process.

Ritter, Morrissey and Bronstein accepted the award on behalf of the group at the APA national conference this month in Chicago.

“We were very excited to attend APA and receive the award,” said Morrissey, the team’s communications director. “The conference is great to learn about what other cities are working on and get a feel of what’s going on.”

Morrissey and other members of the planning team have OTREC connections. She and Chloe Ritter worked with PSU professor Kelly Clifton on a consumer spending project, with a focus on cyclists and pedestrians. Sarah Bronstein has also worked on transportation research with Clifton, sponsored by Active Living Research.

The winning project, “Connect Cascade Locks: A Recreational Trails Plan for Economic Development,” was conceived to increase the economic prospects of a small Oregon town, Cascade Locks, through a regionally integrated recreational trails network. The students worked in partnership with the Port of Cascade Locks.

While in progress, the project received attention from BikePortland, OregonLive, Hood River News and the Portland State University Vanguard.

The students surveyed more than 1,200 outdoor recreationists about their use of trails in the Columbia River Gorge, and 51 members of the Cascade Locks community about their ideas and concerns for recreational tourism and economic development.

Over a five-month period, they held local workshops and an open house in Cascade Locks, put together case studies about trail-based tourism in six other cities, mapped out the existing and planned trails in the area, studied past planning efforts, researched opportunities for partnerships with regional and state organizations, interviewed business owners and potential trail users, and came up with a comprehensive final plan.

The APA’s awards criteria state that winning projects must be innovative, transferable, comprehensive, outstanding in analysis and presentation, and effectively carried out. It was the research team's outstanding implementation of the planning process that led to the Cascade Locks project being selected for the award.

Their plan to help Cascade Locks connect the trail network, online here, has been adopted by the city's Planning Commission, the City Council, and the local Tourism Committee.

ODOT is currently working on making a connection to link the Historic Columbia River Highway State Trail. When the trails are fully connected, says Morrissey, “You’ll be able to ride from Troutdale to Cascade Locks without getting on I-84.”

The new ODOT trail was already in the works before Celilo started their plan, but, says ODOT coordinator Kristen Stallman, the planning team's research contributed to the trail's positive reception by members of the Cascade Locks community.

There will be an opening celebration Sept. 14-15 in Cascade Locks, to celebrate the completion of the ODOT trail.

This August, the annual Policymaker’s Ride — an invite-only bike event aimed at finding room for improvement in the Portland area’s bicycling infrastructure — will be held in the Gorge, along the Historic Columbia River Highway to Cascade Locks.