Principal Investigator: Rob Zako, University of Oregon
Project Overview: Effectiveness of Transportation Funding Mechanisms for Achieving National, State, and Metropolitan Economic, Health, and Other Livability Goals
Learn more about this research by viewing the two-page Project Brief; download the toolkit co-published with T4A, related presentations and the full Final Report on the Project Overview page. Hear firsthand from the PI by watching the post-webinar recording here.

The full final report on this project is now published. The final report offers a comprehensive look at six case study states' strategies to ensure they are delivering value to taxpayers in a transparent process.

What do Americans get in return for their transportation investments? It’s a simple enough question on the surface, but digging for an answer yields a gnarled knot of... 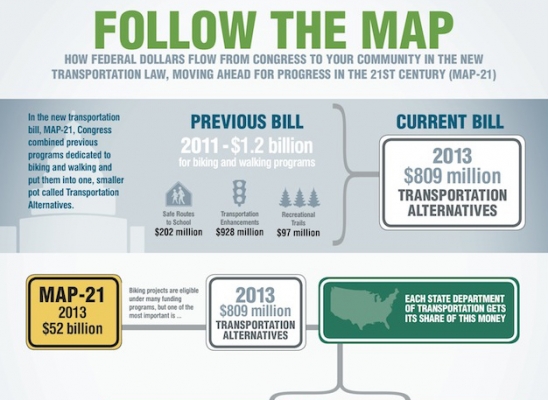 A Quiet Revolution in Transportation Finance

In general under the new law, "states have more authority to spend federal money in the ways they want than before," Tomer said.
This flexibility at the state level is the answer Tomer would give to those who worry that the new act will cut funding for bikes and walking. Although there is less funding designated for bicycling and...
Read more