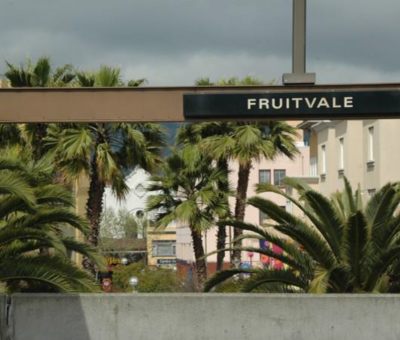 Designers of the Fruitvale TOD created a direct sightline from the BART platform to St. Elizabeth's Cathedral, a key religious cultural icon of the neighborhood.

In the last few decades, both sites have seen TOD coincide with neighborhood revitalization, and gained national and international attention. The secretary of the United States Department of Housing and Urban Development, Shaun Donovan, referred to the MacArthur park TOD as a “model that the rest of the country should be looking to” after touring it in 2013.

A TOD is a high-density mixed-use residential and commercial area built around a transit stop or station. TODs are designed so that those who live and work within a quarter to a half mile of the transit stop have easy access to public transit.

An assistant professor in the department of planning, public policy and management, Sandoval has been studying MacArthur Park for a long time — he even published a book in 2010 called Immigrants and the Revitalization of Los Angeles: Development and Change in MacArthur Park — but this is the first time, he says, that he has looked at MacArthur Park’s transformation exclusively from a transportation perspective.

In this research project, Sandoval specifically focused on the TOD and how it came about. “Now I realized that the TOD was the key catalyst for initiating a lot of the revitalization at MacArthur Park. I had a chance to go back and specifically focus on the TOD, which was really nice. It opened up a lot more opportunities to really understand the dynamics of that neighborhood, and to really understand how those dynamics influenced the TOD projects,” Sandoval said.

Sandoval and Roanel Herrera, a graduate research assistant at UO, put together detailed case studies of the MacArthur Park Metro Station and the Fruitvale Transit Village. They also performed an extensive literature review about the history, economic and social effects of TOD in the United States. Using a comprehensive, “thick description” approach, they sought to answer the following research question:

How can large-scale TOD projects contribute to the revitalization of low-income Latino communities?

What they found was that large-scale TODs are most likely to help serve as catalysts for improving low-income neighborhoods if planners pay attention to three factors.

First, it takes an asset-based approach. This means building upon services and industries that are already in place, as well as finding ways to enhance their accessibility by the greater community.

Second, TOD efforts should encourage more bottom-up participatory forms of activism. In planning, bottom-up refers to a decision-making process in which community members are highly involved, while top-down refers to a process in which decisions are made by officials and come from outside the neighborhood itself.

The MacArthur Park Metro Station was initially conceived as a top-down redevelopment project which did not take the local community into consideration. Original plans for the area included changing the demographics in the neighborhood by bringing in luxury condos and higher end retail. Community leaders, with the help of local Latino politicians, were able to create a more bottom-up TOD project that has contributed to community benefits.

In the case of Fruitvale, the TOD was achieved through a top-down process, but the project was guided by community-based organizations and had strong Latino leadership, so that the concerns of local residents were represented. Local involvement is always an important factor for planners to consider.

One of the most important components is affordable housing. In most cases of TOD, the new built capital is likely to increase the value of the neighborhood. MacArthur Park is a case in point: although it now has many of the amenities that draw wealthy urbanists, the original community was not displaced because of the key role affordable housing advocates played in its development.

The Fruitvale Village is an entire package that has health care, child care, a city library, a senior center, and a charter high school. These social services have had positive equity impacts in the community.

If all three of these factors are taken into account during the planning and implementation processes, TOD stands to contribute significantly to neighborhood revitalization.

Sandoval plans to continue his research with more case studies, one in Hillsboro, Ore. and three more sites in California. Taking the ideas and findings from Fruitvale and MacArthur Park, he wants to probe more deeply into government-directed revitalization, community activism, retail and housing issues. For more details and to read the complete case studies, click here to visit the project page or download the final report.