The main takeaway from this expanded analysis? Only 5% of all residents in the U.S., compared to 48% of all jobs, are within a half-mile of FRT stations. Far more jobs exist near transit stations than homes for those workers, and filling in the “missing middle” of housing types (e.g., townhouses, single-family attached units) would put density and affordability within greater reach of many cities.

Led by University of Arizona researcher Arthur C. Nelson, this study was proceeded by his three earlier NITC projects, with a final project forthcoming.:

WHAT IS FIXED ROUTE TRANSIT?

Up until the early 1980’s, commuter rail and heavy rail transit were the mainstays of FRT systems in the U.S. – serving older, larger cities in the Northeast and the Great Lakes. Fast forward to the early 21st century and we see that most metropolitan areas of more than one million people, and many smaller ones, now operate light rail transit (LRT), streetcar transit (SCT), and bus rapid transit (BRT) in addition to commuter rail transit (CRT) systems. Learn more in our  2014 webinar on LRT and BRT and CRT and SCT ... Oh My!. These systems primarily exist to move people: perhaps mostly to downtown areas, but also to suburban centers, medical centers, educational institutions, sporting and recreation venues and other destinations.

Policymakers and planners often envision other objectives to justify the cost of an FRT system such as expanding economic development, making jobs more accessible to lower-income workers and households, reducing congestion and its collateral outcomes such as air pollution, and improving the balance between where people work and live.

Exploring whether FRT systems actually achieve these outcomes is the purpose of this research. The researchers explored ways in which FRT systems, and especially transit stations, make a difference in these areas. The central research question is: Are there differences in development outcomes over time with respect to FRT station proximity, and do these differences vary by type of FRT system?

The Portland Streetcar has grown alongside new residential development since its inauguration in 2001:

This report expands the number of FRT systems used in analysis from a total of 30 systems to a new total of 52 systems: 17 LRT, 14 BRT, 9 SCT, and 12 CRT systems in 35 metro areas across the United States. It also expands the period of analysis to 2015 for jobs-related data, 2016 for census data, and 2018 for CoStar commercial rent data. The expanded and updated data repository allows for more comprehensive assessment of their outcomes.

Findings reveal that, with greater proximity to FRT systems: 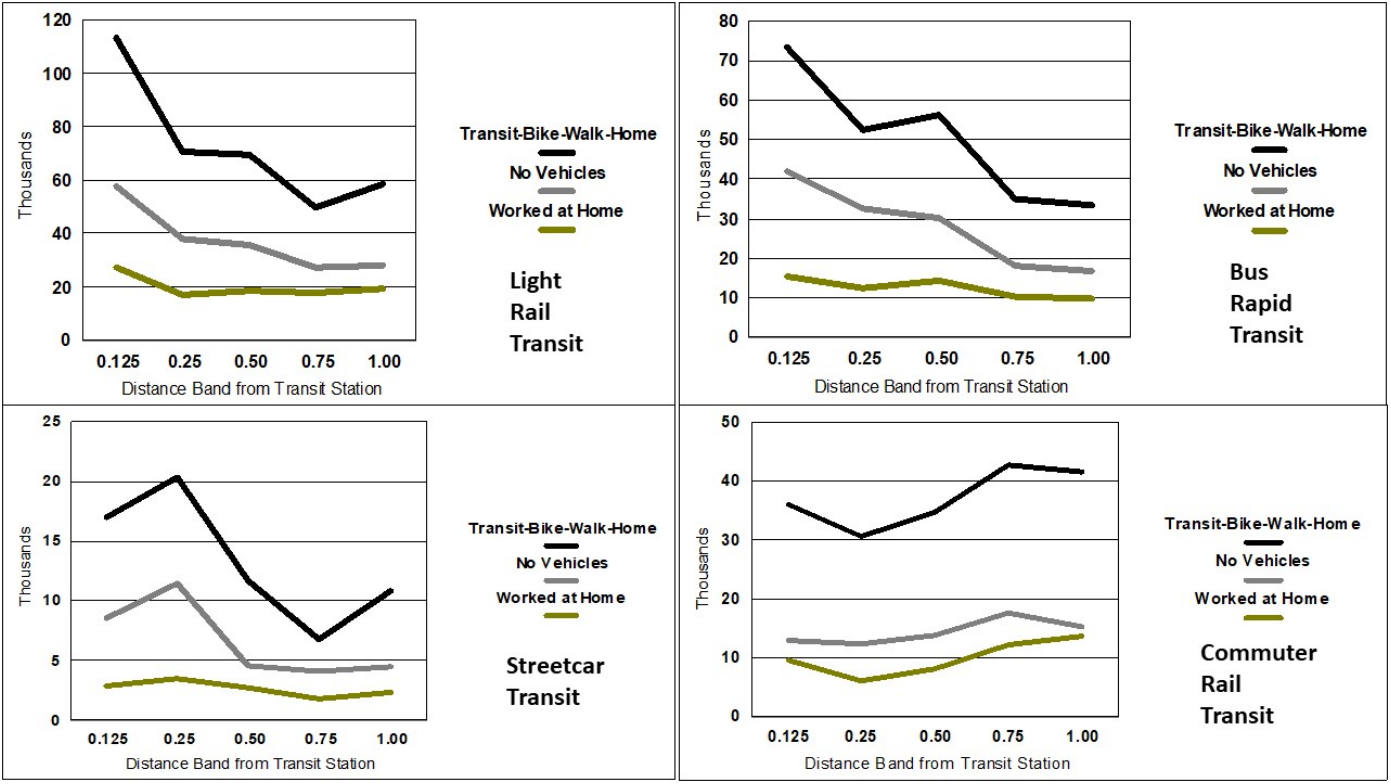 TRANSIT AND LAND USE PLANNING IMPLICATIONS

Analyzing these data findings and connecting them to broader implications for planners and policy makers in transit-oriented development (TOD), the researchers found that:

In most cities, far more jobs exist near stations than homes for those workers. Improving this balance with an increase of housing can reduce congestion, improve accessibility and provide greater land use variety near transit stations.

Transportation is also of high importance, and policies should aim to provide greater local accessibility through built environments that help circulate more people without automobile use.

Local-scale wage-housing cost balance is important to efforts to improve both housing and transportation efficiency and equity. Filling in the “missing middle” of housing types (e.g., townhouses, single-family attached units) would put density and affordability in greater reach for many cities.

Of final note, an important statistic indicates where the “low-hanging fruit” exists: only 5% of all residents, compared to 48% of all jobs in the U.S., are within a half-mile of FRT stations. Significant opportunity exists within two miles of transit stations to increase accessibility and jobs-housing balance, while supplying the shifting preference for TOD residence and transit-based commutes.

Planners and policymakers will find a wealth of data to inform these decisions in the report Updating and Expanding LRT/BRT/SCT/CRT Data and Analysis (PDF), and researchers can use the datasets generated by this project to further investigate the interrelationships between jobs, housing, and transit.