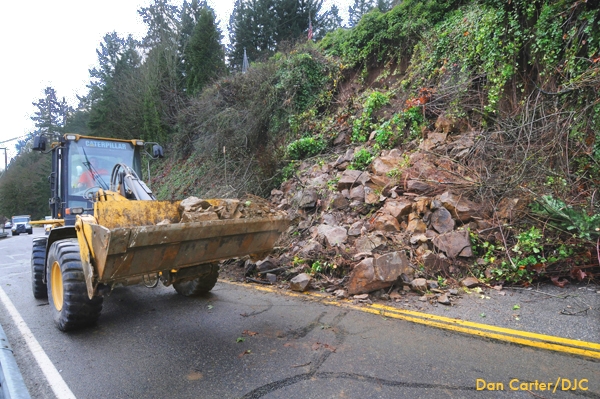 The Oregon Department of Transportation, like DOTs in most other states, has an ongoing struggle to maintain public highways against earth movements such as erosion, earthquakes and landslides. An earthquake or landslide can close down a road for days, while highway workers fight to keep supply lines open and repair the damage.

In Oregon, particularly along the coastal roads, these natural processes are a constant threat to transportation infrastructure. The damage caused by gradual erosion is typically not detectable until there is a landslide or other disaster, costing the state considerable time and money to repair. New technology has the potential to change this. Many landslides, in fact, show some form of movement prior to catastrophic failure. A team of researchers, led by Michael J. Olsen of Oregon State University and sponsored by a research grant from OTREC, set out to improve upon the methods that ODOT uses to detect and prevent structural threats.

Olsen details his findings in an OTREC final report. Click here for more on the project, or download the final report.

The research centers on a three-dimensional remote sensing technology known as LiDAR. Short for Light Detection and Ranging, LiDAR has been used for the last fifteen years in fields as diverse as archaeology, seismology, forestry, geology, and atmospheric physics. It is a “line-of-sight” method of 3D scanning, in which laser beams are aimed at terrestrial formations. After taking multiple scans from different vantage points of an area, researchers merge the scans together to form a complete 3D model of the site. The technique is sensitive enough to represent fine details, even down to the texture of the leaves on the vegetation when a high-definition scan is used. When scans of a cliff or embankment, even in lower definition, are compared with past scans of the same area, it becomes possible to determine the rate of erosion and to predict the location of a landslide. Highway workers can then do preventive maintenance to shore up structural weak points, rather than have to perform emergency missions to clear a destroyed road.

In the past, ODOT has used an airborne application of LiDAR, in which a laser scanner mounted on an airplane does a broad sweep of a several-hundred-kilometer area. Airborne LiDAR was used to map existing landslides based on topographic signatures. It also could be used to predict change; analysis on subsequent scans could be done during post-processing back in the office to determine where erosion was happening. There are drawbacks to this method, however, including the fact that in Oregon, some of the most problematic areas for highway maintenance are the landslide-prone sea and riverside cliffs. An airborne laser scanner looks down from above, and doesn’t “see” the vertical sides of cliffs.

Enter Olsen and his team. They developed a method to use TLS, or terrestrial laser scanning, with a scanner mounted on a tripod. As a supplement to the aerial views, the ground-based scans fill in the missing information about vertical cliffsides. The new method is also a lot more efficient: Olsen’s team developed an algorithm that allows landscape changes, even minute alterations, to be detected immediately in the field rather than through analysis later. The program they created, called LISCAN, combines the fast-working algorithm with a simple-to-use interface that works with the TLS units.

In developing the process, Olsen and his team worked on two test sites along Oregon’s coastal route, Highway 101: the Spencer Creek Bridge site and the Johnson Creek landslide. The Johnson Creek landslide site, they found, does show active movement. The team collected baseline information for these sites, then took new scans. By comparing newly acquired scans to their baseline information, they were immediately able to see what change had happened in the interim. The algorithm works quickly, executing its comparisons within less than a minute. This allows research teams to analyze data while still in the field so that they can make additional observations and better understand the geologic processes of the site.

Olsen will be presenting his findings at the Oregon DOT surveyor's conference March 19-20, 2013. LISCAN, the open-source program he developed for use of LiDAR in the field, will be provided to ODOT for use in monitoring hazardous sections of highways. Real-time change detection, in the field, stands to significantly increase ODOT’s effectiveness at preventing landslide-related highway damage.