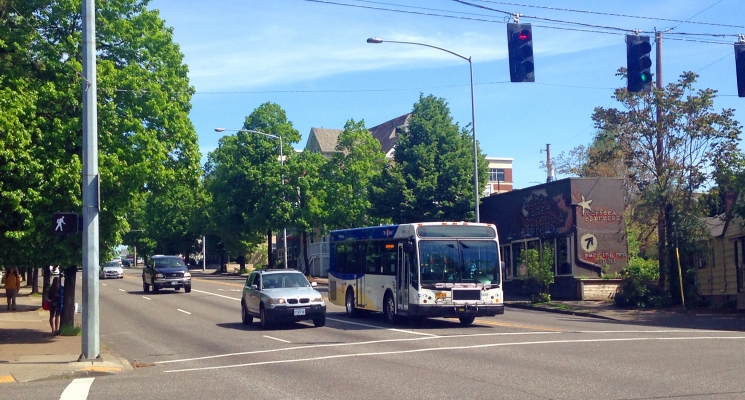 A TriMet bus waits in the left-turn lane at SE Powell and 26th Ave, an intersection employing both SCATS and TSP.

The fine-grained level of data allowed the researchers to focus their attention on developing a methodology and algorithms to study a single intersection at a time, rather than on the overall performance of the corridor as done in past studies.

When using TSP, bus operators have the ability to request a signal light to turn green early when they are ready to move, or to stay green longer when approaching an intersection. These settings are designed to keep transit running smoothly, but they must be properly maintained in order to work.

TSP systems require continuous monitoring to promptly detect problems. The low numbers of granted TSP phases at some intersections in this study showed that TSP settings were not working properly and that adjustments were needed.

Wei Feng, a recent doctoral graduate from PSU who now works at the Chicago Transit Authority as a performance analyst, co-authored the report. Figliozzi and Feng found that a sizable gap remains between the ideal TSP effectiveness and its actual performance.

The TSP performance evaluation results provided worthwhile information for the city and the transit agency to identify potential problems and improvement opportunities for Portland’s TSP system.

The algorithms and performance measures are general and can be applied to other corridors where TSP is implemented (with or without SCATS or adaptive traffic signal control).

For more information about this project, visit the project page or download the final report. It will also be published in the forthcoming 2015 Transportation Research Record.