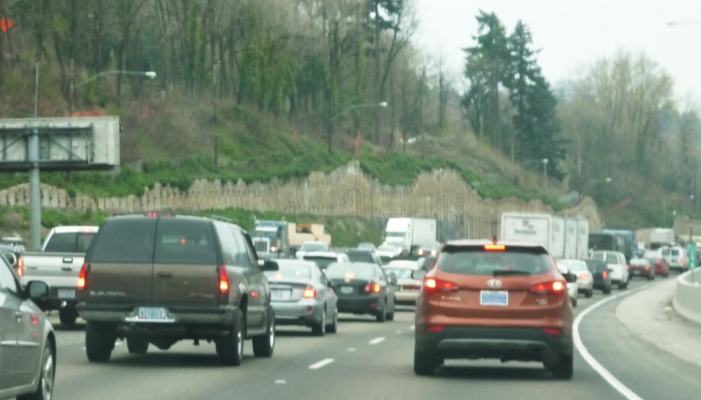 Freeway emissions can be reduced by maintaining optimal traffic flow.

When planning their daily commute, most drivers account for the traffic they know is unavoidable: at peak times of day, like morning and afternoon rush hour, they probably allow extra time to get where they’re going.

The delays that are harder to accept are the unexpected ones, when accidents, road work, or a traffic bottleneck turn a thirty minute trip into an hour.

This unpredictable postponement leads to natural frustration on the part of drivers, as it may cause them to be late to work or late picking up children from school. A reliable road network is one in which this is a rare occurrence.

A project led by Portland State University’s Miguel Figliozzi explored the value of this travel-time reliability using a study of commuters’ route choice behavior, taking a look at the trade-offs between reliability, traffic congestion, and air pollution.

The details for the combined project can be found here.

In the first phase of the research, co-investigators David Levinson and Kathleen Harder of the University of Minnesota sought to measure the route choices drivers made in a real-world setting. Instead of just having people fill out a survey about whether they would choose to take major roads or the freeway to work, this study ambitiously placed GPS units in the cars of volunteers, to measure their actual behavior based on factors that arose each day.

They wanted to determine the importance of reliability in commuters’ route choices. If travelers could ensure reaching their destinations in a time-certain manner, the researchers thought, they might be willing to drive on paths with longer travel-times rather than risking the use of paths with shorter travel-times but higher variability.

Volunteers were provided with three customized routes, based on their origin and destination. They were given one choice that was mainly freeway, one that was mainly on arterial roads, and one that kept to the side roads. After a two-week period of familiarizing themselves with each route, they were given the freedom to choose which one they would take on a daily basis.

Only 18 of 54 participants finished the study. The limited sample size, and some unfortunate GPS equipment failure, made the results somewhat inconclusive. The added realism of the novel data collection method, however, may help to create more accurate models in the future, making it easier to predict traffic patterns. The development of the research methodology for this study stands to benefit future research in determining the importance of reliability to commuters’ route choice behavior.

Figliozzi built upon this research in the next phase of the project, with a study aimed at finding out the importance of reliability to decreasing air pollution.

Traffic congestion is increasing around the world, particularly on urban freeways. In developed nations, surface transportation networks have matured to the point where it is difficult to increase their functioning by adding new links or lanes. This curious fact is observed in the Braess Paradox, which states that adding extra capacity to a network, when the moving entities choose their own route, can in some cases actually reduce overall performance. So it becomes a real challenge to find ways to cut down on congestion. It is sometimes assumed by transportation policymakers that reducing congestion will reduce emissions; that less congestion equals less pollution. But is it so?

After creating a mathematical function that let them plug in values for travel rate, various types of emissions, and fuel consumption rates, they applied their model to a congested freeway corridor in Portland, Ore, and to six distinct urban areas: Atlanta; Los Angeles; Raleigh-Durham, N.C.; Las Vegas; Nashville, Tenn; and Honolulu.

Assuming delay, emissions, and fuel costs and also a fixed value per trip, there is a clear relationship between reliability and optimal traffic flow. In all cases, as unreliability increases the traffic flows that are optimal from a societal point of view tend to decrease. Reducing travel-time variability, the research shows, is essential to reduce unnecessary delays, fuel costs and emissions. More details on this research can be found here, in a paper by Figliozzi and Bigazzi: "A Model and Case Study of the Impacts of Stochastic Capacity on Freeway Traffic Flow Benefits and Costs." Less intuitively, it was found that reducing congestion does not necessarily lead to a reduction in emissions because there is rebound in the travel demand. In fact, in many cases even with low travel demand elasticity, reduced congestion can lead to an increase in emissions because the increase in the volume of vehicles that are able to travel outweighs emissions reductions due to better vehicle operation. Click here to view the final report, "Congestion and emissions mitigation: A comparison of capacity, demand,and vehicle based strategies."

Traffic congestion is increasing around the world, particularly on urban freeways. In developed nations, surface transportation networks have matured to the point where it is difficult to increase their functioning by adding new links or lanes. Adding extra capacity to a network can in some cases actually reduce overall performance. So it becomes a real challenge to find ways to cut down on congestion. The research in this project shows that increasing travel-time reliability is an important step toward decreasing congestion.