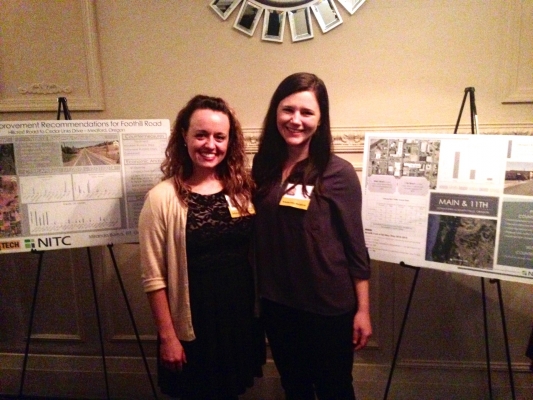 Two students from the Oregon Institute of Technology have been awarded 2015 WTS Portland Chapter Scholarships.

Miranda Barrus and Danit Hubbell were named as the recipients of these highly competitive scholarships, open to applications from students in universities throughout Oregon and Washington.

Both Barrus and Hubbell have a keen interest in transportation engineering. They have each completed multiple transportation-related internships through CECOP and are active members of Oregon Tech's Institute of Transportation Engineers (ITE) Student Chapter. Hubbell is the 2015-16 Chapter President, while Barrus is the Vice-President and Field Trip Coordinator.

Founded in 1977, Women’s Transportation Seminar (WTS) is an international organization dedicated to building the future of transportation through the global advancement of women. Boasting more than 5,000 members (both women and men), WTS is helping women find opportunity and recognition in the transportation industry. Through its professional activities, networking opportunities, and unparalleled access to industry and government leaders, WTS is turning the glass ceiling into a career portal.

The formal award of these scholarships took place December 10 at a dinner held in Portland.