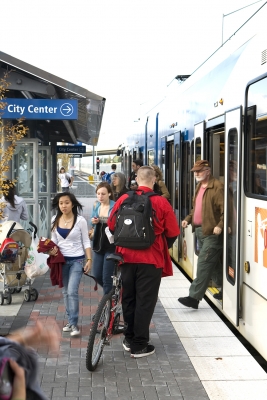 Topic: Examining the Role of Internal Planning Decisions in Improving Transit Performance and Economic Outcomes
Summary: Scholars and practitioners continuously seek best practices to increase transit ridership, efficiency, and modal share. The ongoing suburbanization and decentralization of U.S. metropolitan regions brings new challenges for accomplishing these goals. Investigating possible strategies for improving transit outcomes in the existing socioeconomic setting, scholars from the Florida State University have pointed to the role of internal performance factors. In a series of research studies, they have found that improving transit service characteristics, such as frequency, connectivity, regional coverage, intermodal integration, as well as decentralization of network structures, could result in increased transit ridership and productivity. These positive effects could be observed even in auto-oriented, low-density environments.

This presentation will briefly summarize the previous findings regarding the role of internal factors in improving transit performance and elaborate on the most recent study, which has attempted to assess the economic effects of implementing planning strategies based on adjusting the internal factors. While the previous research utilized average ridership and average vehicle load as primary measures of transit outcomes, this study evaluates the benefits and costs of adjusting specific internal factors, with the objective of determining whether the additional costs of improved service could be balanced with increased revenues and social benefits. The study focuses on 13 U.S. bus and light rail systems during the 2001 – 2011 period. The results indicate that higher service frequency and service density are positively correlated with the amount of net benefits generated by bus and light rail systems. Simultaneously, the degree of network decentralization appears to have no significant influence on the benefits and costs.

Bio: Michal Jaroszynski is a Ph.D. Candidate in the Department of Urban & Regional Planning at Florida State University. His research interests include the economic aspects of public transportation, such as assessing costs and benefits or finding the methods of improving its efficiency and productivity. He is also interested in analyzing policies related to transit service planning and network design, especially in the context of rail and multimodal transit systems. During his doctoral program, he served as an instructor and research assistant, and he successfully published several journal articles and reports. He has a M. Sc. Eng. degree in rail logistics from Warsaw University of Technology (2009) and he expects to earn his Ph.D. degree from Florida State in December 2014.