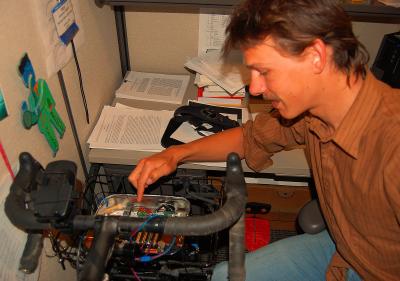 Alex Bigazzi, a 2014 NITC dissertation fellow and graduate of Portland State University's Civil and Environmental Engineering Ph.D. program, has published a paper based on his NITC-funded research in Environmental Science & Technology, a journal of the American Chemical Society (ACS).

Participants rode a variety of routes including bicycle lanes on primary and secondary arterials, bicycle boulevards, off-street paths and mixed-use roadways. They were told to ride at a pace and exertion level typical for utilitarian travel, and breath biomarkers were used to record the amount of traffic-related pollution present in each cyclist’s exhalations.

This research was the focus of Bigazzi's dissertation, Bicyclists’ Uptake of Traffic-Related Air Pollution: Effects of the Urban Transportation System, published by NITC in December 2014. It was related to an earlier project that Bigazzi worked on with his faculty advisor, Miguel Figliozzi, and PSU professor James Pankow, in which the research team measured bicyclists' exposure to traffic-related air pollution.

Looking beyond the simple fact of exposure to pollution, Bigazzi's dissertation research specifically measured the cyclists' uptake of pollution, or how many volatile organic compounds were actually absorbed by the body.

The study also revealed that cyclists can significantly reduce their pollution uptake by making even minor, one- to two-block detours from major arterials to parallel low-volume streets.

Bicycle planning documents or master plans do not typically include this type of air pollution minimization guidance, because of limited data on the effects of bicycle networks.

This research has important implications for health impact assessments and bikeway design.

Bigazzi is now an assistant professor in the Department of Civil Engineering and School of Community and Regional Planning at the University of British Columbia. He is also a member of the Transportation Research Board’s Transportation and Air Quality Committee and a former US National Science Foundation Graduate Research Fellow.