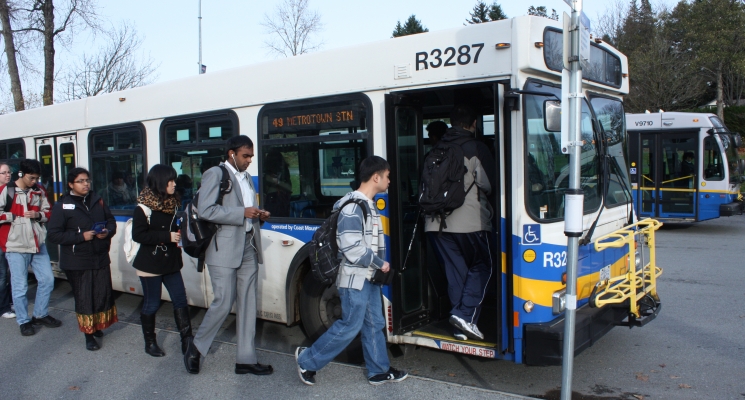 Passengers with smartphones and tablets board a bus

The process could save transit agencies “hundreds of thousands of dollars,” says lead researcher Christopher Bone, and give them access to comprehensive, real-time data about their ridership, all without compromising passengers’ privacy.

Christopher Bone, Marc Schlossberg, Ken Kato, Jacob Bartruff and Seth Kenbeek of the University of Oregon designed a custom mobile application, which allows passengers to volunteer information about their travel habits, and recruited passengers to use it in a test case.

Their report, “Crowdsourcing the Collection of Transportation Behavior Data,” was released this month.

Participants were asked to use the app for three weeks on Lane Transit District’s EmX bus line located in the Eugene-Springfield area in western Oregon. Researchers placed sensors on the buses and at stops to detect when someone using the app was boarding. When a user came within range of a sensor, they automatically received a questionnaire to fill out.

“There’s no tracking of people, we only know that a phone got on a bus and off at specific stops. We don’t know who it was and we don’t know anything about their location before or after. A big part of this project was finding ways to enhance data collection while still respecting people’s privacy,” Bone said.

Transit agencies have to collect data on ridership to make sure service meets demand. How many travelers use a given route, the expected number of riders at peak times of day, and which modes they use to get to the transit stop are all key pieces of information for planning route maps, schedules and facilities.

These counts are typically collected either by automated counting technology or by people with clipboards. It’s expensive to do, and yields relatively small data samples. Using the riders of public transit themselves as the providers of data has potential to be both cheaper and far more informative.

The smartphone app developed in this project collects the standard counts in addition to information about users' mode choices and personal experiences during their commute.

“Visualizing the data would be an automated process,” says Bone, meaning transit agencies using the app would receive their data in the form of maps, graphs and charts in addition to the raw numbers.

Transit agencies could tailor the questionnaires to their needs, collecting information about certain places, events or changes in their services.

“Our ultimate goal is to make a fluid conversation between transit agencies and their ridership,” Bone said.

For this method to take off, riders would need some incentive to download and use the app. Many transit agencies, including TriMet, the transit provider for the Portland, Oregon, metro area, already have a mobile app. For passengers who use their phones to pay fares and plan trips, it would be simple to integrate the data collection into the existing app.

Agencies could also offer fare reduction incentives to motivate people to fill out the questionnaires.

The next step for the research team will be to develop the app past the beta version and implement it across an entire transit network, to see how well it performs on multiple service lines.

To learn more about this research, visit the project page or read the project brief for a quick summary.