The National Institute for Transportation and Communities (NITC) is proud to introduce our newest Dissertation Fellow, Austin Drukker of the University of Arizona, who was awarded $15,000 for his doctoral research project: How Essential is Essential Air Service? A Welfare Analysis of Airport Access for Remote Communities

Mr. Drukker will study the welfare implications of Essential Air Service (EAS), a federal government program that provides subsidies to airlines that provide commercial service from remote communities. Congress established EAS after the Airline Deregulation Act of 1978, which gave airlines almost total freedom to determine which domestic markets to serve and which fares to charge, fearing that the newly deregulated airlines would shift their operations to serve large, profitable markets, leaving remote communities without access to the national passenger airline network and the markets and opportunities that come along with such access. By combining novel data containing information on airline passengers’ home location with cutting-edge econometric techniques, Mr. Drukker will study the value that EAS community members place on having access to their community airport as revealed by their actual choices. Mr. Drukker’s preliminary findings suggest that passengers who live in communities with subsidized service have a plethora of choices available to them and many if not most community members actually prefer to connect to the national passenger airline network by driving—in some cases several hours—to a larger airport rather than by flying from their local, subsidized airport. Mr. Drukker’s research will have broad implications for the design of public policies aimed at connecting communities across the United States. 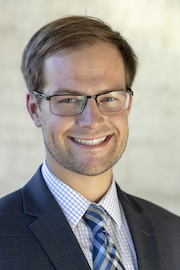 Austin Drukker is a doctoral student in economics at the University of Arizona. His research mainly focuses on the intersection of industrial organization and public policy. From 2015 to 2018 he was a research assistant at the Brookings Institution, where he primarily worked on issues of taxation and public finance. His influential work studying federal tax exemptions for the construction of professional sports stadiums has been cited by the New York Times, the Wall Street Journal, the Washington Post and many others, and his work has directly influenced several pieces of federal legislation; including most recently the No Tax Subsidies for Stadiums Act of 2022. He is an active member of the American Economic Association, the National Tax Association, and the Association of Christian Economists. Connect with Austin on LinkedIn.