In 2014, NITC published a study on racial bias at crosswalks under a Small Starts grant. Read coverage of that project in the New York Times and Washington Post. The next phase of the research is now complete, with more comprehensive findings.
Principal Investigator: Kimberly Kahn, Portland State University
Project Overview: Racial Bias in Drivers' Yielding Behavior at Crosswalks: Understanding the Effect
Learn more about this research by viewing the two-page Project Brief, related presentations, and the full Final Report on the Project Overview page. Hear firsthand from the PI by tuning in for the webinar on October 26th (recording available post-webinar). 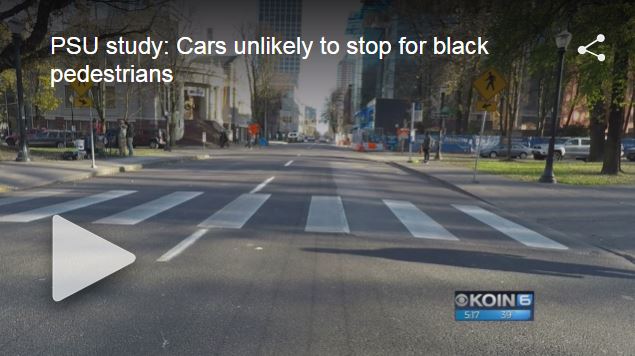 Led by Dr. Kimberly Kahn of Portland State University, the purpose of this investigation is to explore social identity-related factors that influence drivers’ behaviors in interactions with pedestrians at crosswalks. Dr. Kahn and her research team conducted a field experiment where black and white male and female pedestrians wore identical clothing and repeatedly crossed the same intersection in a systematic manner, with coders in the field marking drivers’ behaviors.

The initial study found that black male pedestrians were passed by twice as many cars and waited nearly a third longer to cross than white male pedestrians. The second phase of the research, Racial Bias in Drivers' Yielding Behavior at Crosswalks: Understanding the Effect builds on the first study and examines how additional factors, such as gender, affect drivers’ stopping behaviors at crosswalks.

With a black pedestrian, cars were more likely to stop after the stop bar, infringing on the pedestrian's crossing space. With white pedestrians, the cars were leaving more of a buffer for the pedestrian to safely cross.

"We think that that has implications for pedestrian safety, and may help partially explain why we see disproportionate pedestrian fatalities based on pedestrians' race. If cars are stopping closer to black pedestrians, that could have safety implications," Kahn said.

"When stopping is perceived as discretionary, rather than mandatory, that's where these types of biases are more likely to impact behavior," Kahn said.

The differences in stopping behavior may reflect implicit biases that are impacting drivers' decision making.

"It's not necessarily that drivers are consciously seeing pedestrians and saying, 'I'm not going to stop for this group compared to another.' Instead, the situation tends to reflect implicit or less conscious biases. Particularly when there's a lot of stimuli going on, in a fast-paced activity like driving with quick decisions; those are the conditions under which these subconscious, implicit biases are more likely to affect our behavior," Kahn said.

Dr. Kahn will present these findings in a NITC webinar on October 26, 2017. Read about the research in more detail in this project brief.

To get updates about this and other NITC research projects, sign up for our newsletter.