NITC researchers Stephen Fickas and Marc Schlossberg of the University of Oregon are on a mission: bring the benefits of V2I (vehicle-to-infrastructure communication) to bicycling. Earlier this year they published their proof-of-concept of a DIY vehicle-to-infrastructure "bike box" in Oregon for communicating with traffic signal controllers. In the most recent round of NITC grants awarded this past summer they secured funding for Green Waves, Machine Learning, and Predictive Analytics: Making Streets Better for People on Bike & Scooter.

The latest report to come out of this body of work focuses on a new technology being integrated into modern cars: GLOSA, or Green Light Optimized Speed Advisory. GLOSA allows motorists to set their speed along corridors to maximize their chances of catching a "green wave" so they won't have to stop at red lights. This project demonstrates how GLOSA can be used by bicyclists in the same way it is used by motorists, with a test site on a busy car and bike corridor feeding the University of Oregon campus: 13th Avenue in Eugene, Oregon. 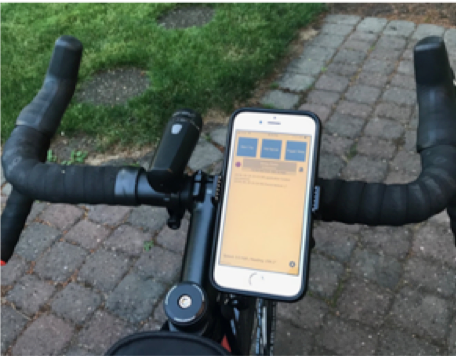 Fickas and Schlossberg created a smartphone app that gives cyclists a real-time GLOSA display (assuming their phone is safely mounted on a handlebar holder like the one shown at right). The app allows a cyclist to tailor their speed in order to catch as many green lights as possible. Testing revealed that this GLOSA-based app was effective, reasonable and safe on the test site.

As of October 2019, the system remains in beta testing with the goal to make it available to the public during the coming year.

This project demonstrates how a combination of agencies can come together to support bicyclists using a city’s transportation system effectively. It makes use of two University of Oregon research groups, the City of Eugene Traffic Operations Office, and real-time traffic information made available by McCain, the company supplying the signal controllers in Eugene.

The app (see screenshot at left) displays both visual and audio cues to the rider to let them know if they should increase or decrease their speed to catch the next green.

Researchers developed a system architecture to use the real-time feed to keep an up-to-date view of signal states. If the feed is lost for any reason, the system will continue to operate with its last known state information. This system architecture, and the app that employs it, uses the phone's GPS and accelerometer sensors to keep an accurate view of the rider’s location, direction and speed.

In general, this system is within the reach of any city that has access to their signal-controller information through a real-time internet feed. Beyond the license fee paid to McCain, all other components of the system are free and open source.

This exploratory study demonstrates that is feasible for a city to consider delivering GLOSA information to their biking public. The bike riders in the trial were given effective, reasonable and non-distracting GLOSA information. However, comments from participants reflected one major stumbling block: The app has no situational awareness in terms of other cars and riders on the road. As long as bike lanes are narrow (or even non-existent), it may be difficult to move ahead of a convoy of fellow bikers.

Further, researchers did not run trials in varying weather conditions, before dawn or after dusk, or under conditions that simulated the McCain server going down. The study makes room for new research to broaden the potential applications of this technology. Join us on December 3rd for a webinar on this research.

This research was funded by the National Institute for Transportation and Communities, with additional support from the University of Oregon.