Does living in a transit-oriented development (TOD) actually change the way people travel? That's the fundamental question that 15 years of research in Portland, Oregon seeks to answer.

Since 2005, Portland State University has worked with Portland’s Metro regional government to survey occupants of buildings for which developers had received funding from Metro’s Transit-Oriented Development (TOD) Program. Metro strategically invests in TODs to help more people live, work and shop in neighborhoods served by high-quality transit. "Revisiting TODs," the latest installment in this research, is led by Nathan McNeil, a research associate in PSU's School of Urban Studies & Planning, and TREC director Jennifer Dill.

The report, released this month, revisits a set of suburban TODs with a second wave of surveys to understand how the travel behavior of TOD residents may have changed since the first survey. As neighborhoods become more developed with walkable amenities, how can we identify which factors influence changes in travel patterns?

Given the longstanding partnership between PSU and Metro, this research series was perfectly poised to investigate changes over time. Jennifer Dill, the director of PSU's Transportation Research and Education Center (TREC), led the first project in 2005. How do TOD residents commute? How often do they walk, bike and use transit compared with driving? Since then, the study has been periodically revisited:

The second-wave surveys, coming 8-13 years after the baseline surveys, include five TODs in the west-side Portland suburbs of Hillsboro and Beaverton, two TODs in East Portland, and eight TODs in the east-side Portland suburb of Gresham. Second-wave surveys were sent to the same buildings as the baseline surveys (in most cases, to every unit), but not specifically to the same people as in the baseline. Surveys asked about household travel options, daily travel for work and non-work purposes, and questions on travel preferences and attitudes.

"Some of these buildings were the first residential mixed-use buildings to go up near a transit station. So we wanted to find out, as those blocks nearby get filled in, does that have any impact on travel behavior? We selected buildings where we saw that there had been neighborhood change over time. Our hypothesis was that we wouldn't expect transit use to change all that much, but we might expect more walking and biking with a more built-out neighborhood in the immediate vicinity, and maybe more shops or restaurants nearby," McNeil said.

The second wave of surveys revealed three changes from the baseline that are consistent with the objectives of TODs:

The residents’ attitudes about travel were very consistent between the two surveys. The only significant changes were:

Consistent with those changes, a higher share of respondents in the second-wave surveys indicated that having sidewalks in the neighborhood was extremely important in choosing their current home (43% in 2020 vs. 31% in earlier surveys) and a lower share said that easy access to the freeway was extremely important (16% vs. 22%). The importance of transit access remained steady at 48%. 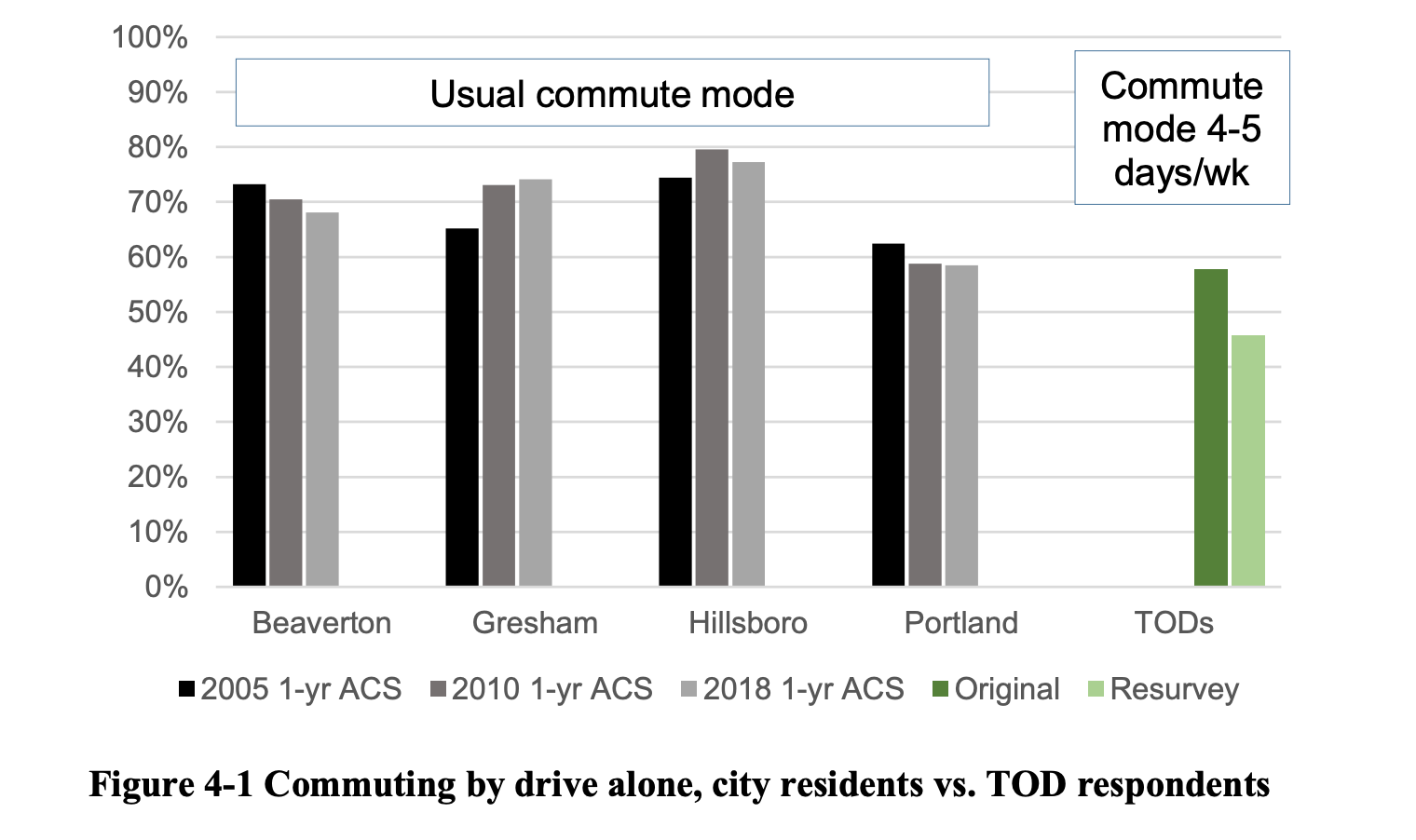 The research team is working on further analysis, including multivariate analysis, to identify specific factors that may help explain the travel behavior changes we did observe, including factors related to neighborhood change.

Transit-oriented development (TOD) seeks to create a symbiotic relationship between two significant infrastructure investments: public transportation and residential and/or commercial buildings. How can policymakers maximize the potential of both? Dense mixed-use buildings provide potential transit riders, while proximity to quality transit provides building residents, employees and visitors with improved access to jobs, services and recreation. However, other factors in the urban environment around the station and TOD building affect the likely success of both. This research offers insights that can help planners understand the factors influencing travel behavior at TODs, including neighborhood features.

"The webinar that we'll do next month will include both findings from this report and also a retrospective of all the TODs surveyed over the years. So that presentation will offer a more broad overview of our TOD research, including more buildings than we were able to include in this report," McNeil said.

This research was funded by the National Institute for Transportation and Communities, with additional support from Metro and Portland State University.

To learn more about this and other TREC research, sign up for our monthly research newsletter.

The Transportation Research and Education Center (TREC) at Portland State University is home to the National Institute for Transportation and Communities (NITC), the Initiative for Bicycle and Pedestrian Innovation (IBPI), and other transportation programs. TREC produces research and tools for transportation decision makers, develops K-12 curriculum to expand the diversity and capacity of the workforce, and engages students and professionals through education.