The National Institute for Transportation and Communities (NITC) is excited to announce the publication of a new visual design guide, "Rethinking Streets for Bikes." Focused on case studies in the U.S., the guidebook will make it easier for North American city officials to design streets with bikes (and the people on them) in mind.

There is a growing demand for better infrastructure and fewer barriers to biking and other forms of space-efficient, micromobility. Tackling daily trips by bike is easier on the environment, healthier for users and non-users alike, uses precious urbanized public and private land more efficiently, costs taxpayers less to build and maintain infrastructure, and when routes are safe and comfortable, moving by bike is also fun! Complete Streets policies are being adopted across the country, and there is an active conversation around the safety imperative of a Complete Streets approach. Yet, local officials often need both design guidance and the confidence on how to retrofit streets for people on bikes that will actually work.

To fill this gap, an interdisciplinary team of NITC researchers, including Marc Schlossberg and John Rowell of the University of Oregon, Roger Lindgren of the Oregon Institute of Technology, and Dave Amos of UC Berkeley (behind the popular City Beautiful video series) created this new public resource. Rather than using hypothetical designs or artistic renderings, the team showcases proven, high-quality, completed projects from a diversity of communities and contexts and does so in a visual way that can help communicate to a diverse set of stakeholders in any community.

MORE THAN A COMMUTE

For decades now, we’ve been building streets as though they have one function—to move cars quickly. The reality is that streets can do so much more than that. Without impeding vehicular travel (unless specifically desired), streets can (and should) be welcoming places for people to walk, bike, shop, dine and socialize.

Streets are often designed for one type of trip—the journey to and from work, ignoring the majority of trips we make, such as to run errands, see friends, or simply enjoy being outside. About 40% of these non-work trips are under two miles, a distance for which walking, cycling, or scootering should be the norm. Yet even though these shorter, non-work trips are more common, streets are not designed for those modes.

PART 2 IN THE RETHINKING STREETS SERIES

As with the first book, the authors intentionally chose ‘regular’ city examples from U.S. cities for Rethinking Streets for Bikes. International cities like Copenhagen (Denmark) or Utrecht (Netherlands) have much higher rates of bicycle use and many lessons to teach American cities, but the European context can be off-putting to local city staff and elected officials in the U.S. who are trying to respond to local concerns and perspectives. The authors were focused on enabling local officials to imagine design solutions for their streets using more familiar, and typical types of situation and community contexts.

Whereas the first book purposefully focused on “average” street retrofit projects to communicate the normalcy of such projects around the country, this second edition focuses on the more ambitious approaches a variety of cities have taken to retrofit their streets to better accommodate people using bicycles. More specifically, how to accommodate normal people using bicycles as a normal mode of transportation—not a special mode requiring uncommon skill or bravery.

The researchers selected projects from a wide variety of U.S. contexts, from small towns to suburbs and large metropolises. No matter the community, there are several case studies in the book that should be applicable to most community contexts.

Part of the challenge involved in rethinking streets has to do with shifting from a traditional way of framing the conversation to a new way of talking about transportation: 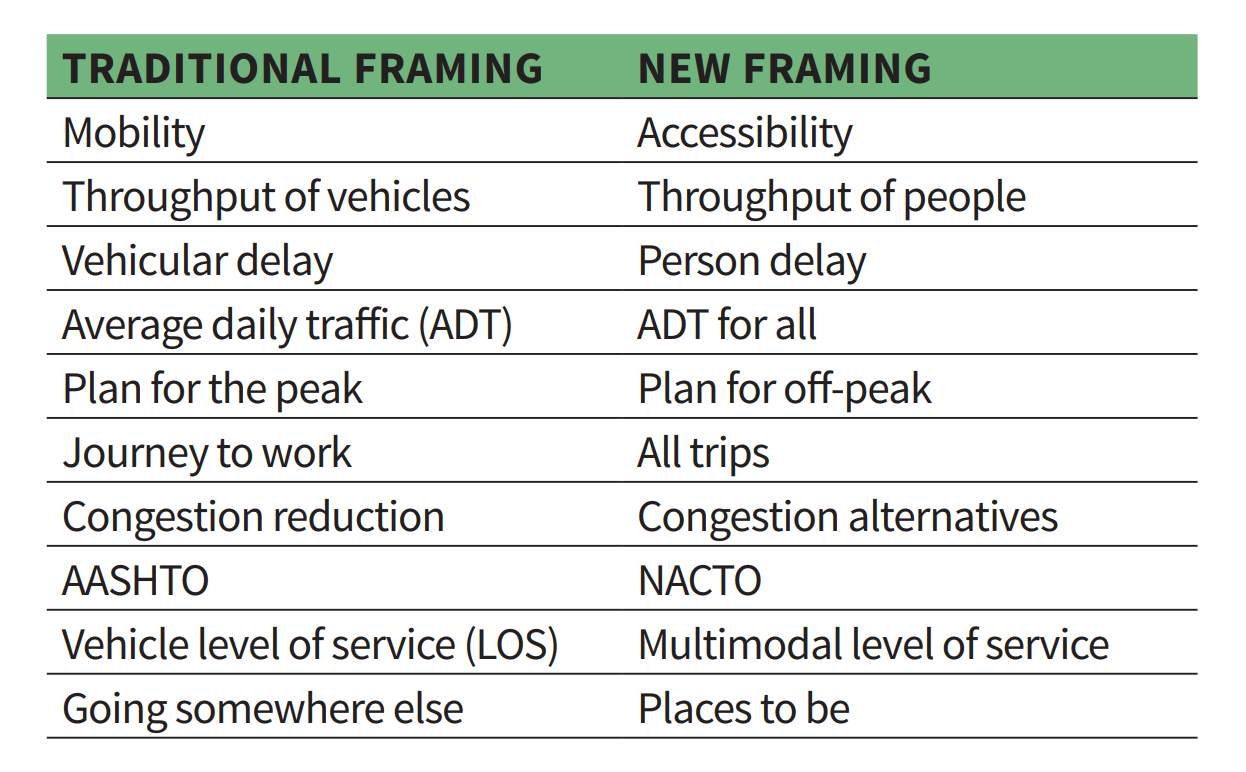 The book, which is available as a free download—with a limited number of free print copies available and otherwise accessed for cost via a print-on-demand service—offers easy access to evidence-based transformations that can be used by practitioners, community members, policymakers, educators and researchers.

This research was funded by the National Institute for Transportation and Communities, with additional support from the University of Oregon; Rowell Brokaw Architects; the City of Eugene, Oregon; and the Oregon Institute of Technology.

The Transportation Research and Education Center (TREC) at Portland State University is home to the National Institute for Transportation and Communities (NITC), the Initiative for Bicycle and Pedestrian Innovation (IBPI), and other transportation programs. TREC produces research and tools for transportation decision makers, develops K-12 curriculum to expand the diversity and capacity of the workforce, and engages students and young professionals through education.