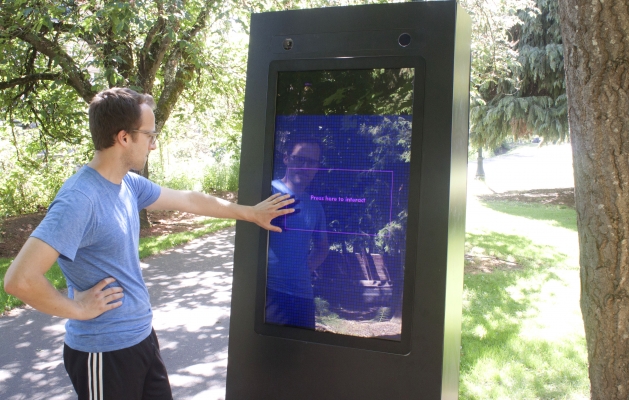 A NITC Small Starts project has taken big steps toward connecting transit users with real-time transportation information about their communities.

The “Street Portals” project, headed by researchers Jason Germany and Philip Speranza of the University of Oregon, is reinventing transit kiosks – specifically bike share kiosks – and how users interact with them in public spaces.

Germany, an assistant professor of product design in UO's school of architecture and allied arts, has a background in designing consumer products and interfaces. Collaboration with Speranza, a practicing architect who was doing research in bottom-up urban design, led to the development of a test bed for interactive kiosks that could reshape the future of urban computing in several important ways.

Typical bike share stations have a kiosk with a touch screen interface that lets the user check out and return bicycles.

The NITC researchers are interested in creating a much richer experience that includes route planning assistance, personalized activity recommendations, and a sensitive interactive display.

The first step was to create a test bed: a sample kiosk built specifically for the purpose of testing screen-based interactions outside. During initial trials, the researchers determined the optimal size and placement of the screen and calibration of the sensor array under conditions of daytime, nighttime and varying precipitation.

Digital displays in public places can function on two levels: as a public display, with generalized information and advertising, and also as a private display. The first challenge for the research team was to have the display on the screen change and invite people to walk up and interact with it.

They tested various motion and proximity sensors, including a depth field sensor with an RGB-D camera (Microsoft Kinect technology). With the sensors in place, the kiosk can perceive when a pedestrian or cyclist approaches it and will change its display accordingly.

That was the first controlled test: watching to see what made people come up and acknowledge the kiosk, stop and approach it, and finally go ahead and touch the screen.

During the next phase of research, through spring 2015, they will be concentrating on developing specialized route mapping software that will assist cyclists with navigating the best bike routes through unfamiliar cities.

“With buses and trains, those routes are fixed. The complexity in route planning is ‘which bus, what time, and where do I transfer.’ Bike share is unique because the routes aren’t defined at all. Just the hubs,” Germany said.

The software they have in mind goes far beyond simple route mapping. Speranza calls it “urban experience mapping,” with the idea that the software will also have access to real-time information about retail and restaurant options, community activities, road conditions and city attractions. Having all of this information available at the kiosk, where people are already gathering to plan and begin their adventure, made perfect sense.

“I’ve used bike share in a number of different cities—Barcelona, New York, Berlin—and the interface is strictly interested in the membership experience: checking out the bike. Rarely does it talk about other kinds of urban experiences, and the possibilities of where someone might go with that bicycle,” Speranza said.

The researchers envision a system that, by collecting user feedback, could provide intelligent recommendations based on individual interests; something like Pandora for bike share.

More information about Germany and Speranza’s urban computing research can be found at the Urban Interactions Lab.

For more details about this project, visit the project page or download the final report.