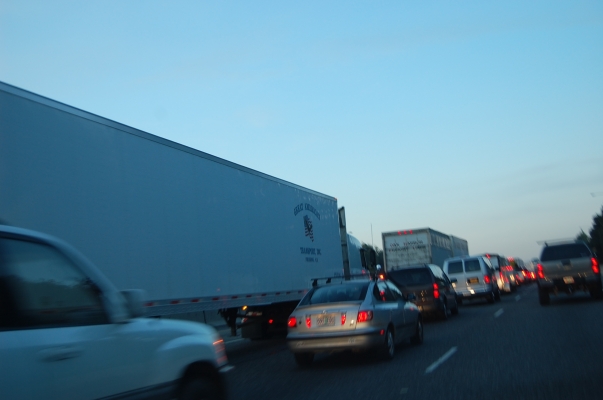 Traffic composition affects air quality as much as traffic volume does; larger vehicles give off more emissions

To determine the impact of SCATS on traffic and transit performance, researchers established and measured performance measures before and after SCATS. The researchers used data provided by TriMet, Portland's transit authority, to compare transit times before and after SCATS as well as traffic volume data from two Wavetronix units that were installed by the City of Portland; these units collect traffic counts, speeds and classifications. For the air quality study, TriMet also provided detailed vehicle characteristics (age, type of engine, etc.) that proved to be important in locations near bus stops.

The researchers also assessed how SCATS and TSP affected each other. Powell Boulevard has been using TSP, or Transit Signal Priority, since 1994. TSP gives signal priority to buses in order to encourage the use of public transit by improving its travel time and reliability. Numerous studies have been conducted about SCATS or TSP, but none have addressed how SCATS functions simultaneously with TSP.  Researchers Slavin, Feng, and Figliozzi found that TSP was not negatively affected by SCATS after controlling for both passenger demand and traffic conditions. Transit travel times were reduced in both directions during the off peak period, which covers most of the day. During the peak periods, improvements in travel time for the entire study corridor segment were observed in the eastbound direction, while there were no improvements in the westbound direction.

Principal Investigator Miguel Figliozzi and research assistant Courtney Slavin, both from Portland State University, set out to model for the first time the impact of signal timing and traffic volumes on air quality. This study is the first research effort to combine real-world detailed traffic signal timing data (at 5 second intervals) and PM2.5 pollutant concentration data; PM2.5 refers to fine particulate matter (less than 2.5 microns in diameter) that can pass through the small airways in a human lung, causing potentially serious health problems.

To determine the impact of traffic-signal timing on pedestrian exposure to particulate matter, a localized study was performed at the intersection of SE 26th Avenue and Powell Boulevard. Cleveland High School sits at the northeast corner of this intersection, and the intersection experiences high pedestrian, biking and transit activity during school start and release times.

Modeling results indicate that green time allocation (that reduces queuing) and traffic volumes do have a significant impact on PM2.5 concentration levels. The impact of vehicle type (heavy duty diesel engines) is also clear. Heavy vehicle volume was a significant variable as well as the presence of buses. The model results show that reduction of bus idling time through more efficient operations and transit signal priority is likely to reduce pollution levels; in addition,  the results show that TriMet  initiatives to improve fuel efficiency by installing EMP engine cooling devices not only improve fuel efficiency but also air quality. Researchers Figliozzi and Moore also found that bus-shelter design and orientation affects exposure levels for people waiting to catch the bus. In a shelter built facing away from the road, the levels of fine particulate matter are less than those in shelters facing the road. Research results also shown that from a joint Safe Routes to School and air quality perspective, students commuting via active transportation modes should choose lower-volume routes.

In addition to the final report, four peer reviewed papers and several conference proceedings were published with the results of this research. For more information please click here to view the project page, or contact the Principal Investigator Dr. Miguel Figliozzi at figliozzi@pdx.edu.