The success of public transportation depends upon public understanding of, and support for, livability. In response to new Oregon state requirements to significantly reduce greenhouse gas (GHG) emissions from light-duty vehicles, a team of University of Oregon (UO) researchers reviewed public communication strategies around transit investments. The overarching conclusion? The most effective framing of public transportation benefits is not around climate change, but rather on livability. Communication should focus on the benefits to people's pocketbooks, choices, health, and community. While this shift in approach has been marginally applied in Portland, a large gap in connecting...

Learn more about this and other "Smart Cities" technology by registering for this September 14 workshop.

Connected Vehicle (CV) technology is coming to Portland, Oregon. We're excited to announce the first step in what could be a long-term game changer for the city: during the winter of 2018, researchers from Portland State University and University of Arizona will work with the City of Portland to deploy a test concept of CV tech on the Portland Streetcar.

Primarily funded by the National Institute for Transportation and Communities (NITC), the Connected Streetcar Project is one of the Portland Bureau of Transportation’s (PBOT) 2018 Smart Cities pilot projects, and also part of the city’s ...

Jul 25, 2018
Principal Investigator: Ran Wei, University of California, Riverside
Project Overview: Evaluating and Enhancing Public Transit Systems for Operational Efficiency, Service Quality and Access Equity
Learn more about this research by viewing the Executive Summary and the full Final Report on the Project Overview page, or sign up for our September 14 half-day workshop in Portland, OR.

Regular assessment of public transit performance is essential. With limited funding and growing public needs, performance evaluation helps identify areas for improvement. But what, exactly, is the desired improvement that transit agencies seek?

If the answer is operational efficiency, then agencies have a clear goal: to achieve the highest ridership possible with the lowest operational costs.

If the answer is access equity, then again a clear goal emerges: to extend transit to neighborhoods with high concentrations of low-income residents and minorities, and to evaluate proposed route changes through the lens of supplying much-needed services.

The real answer, of course, is both. Historically, research has examined... 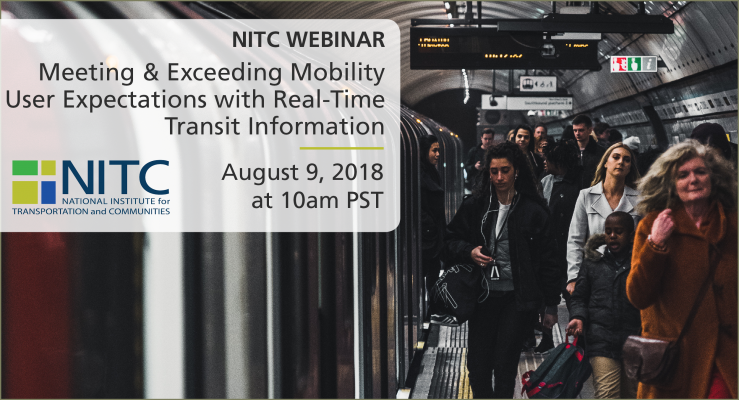 The proliferation of transit planning and real time arrival tools that have hit the market over the past decade is staggering. Yet with transit ridership on the decline, agencies can’t afford to ignore the importance of providing accurate, real time information to their customers. Real-time transit information improves the reliability and efficiency of passenger travel, but barriers have prevented some transit agencies from adopting the GTFSrealtime v1.0 technology. A new NITC-funded study in May led by Sean Barbeau of the... 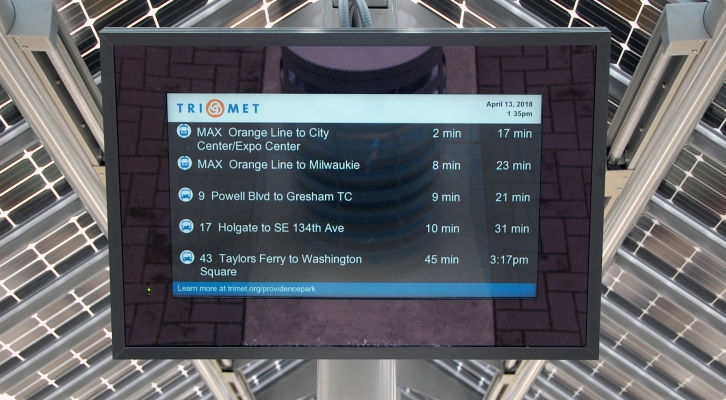 May 10, 2018
Principal Investigator: Sean Barbeau, University of South Florida
Project Overview: Overcoming Barriers for the Wide-scale Adoption of Standardized Real-time Transit Information
Learn more about this research by viewing the Executive Summary, related presentations, and the full Final Report on the Project Overview page. Hear firsthand from the principal investigator by tuning in for a webinar on August 9, 2018 (recording made available).

Robert Hibberd and Arthur C. Nelson will give an interactive workshop on Thursday, September 13, 2018 as part of our Transportation & Communities Academy 2018....

Webinar: Case Studies in the FTA "Manual on Pedestrian and Bicycle Connections to Transit"

Webinar: Case Studies in the FTA "Manual on Pedestrian and Bicycle Connections to Transit"

Transportation Can Be Especially Complicated for the Food Insecure; NITC Research Offers Solutions

In Tampa Bay, Florida, it's hard to get around without a car. For those who depend on transit, the simple task of bringing groceries home can take up an entire afternoon.

Add the extra difficulty of food insecurity—which affects a wide variety of people and may mean they can't afford to go to the grocery store, but must travel to a food pantry—the task of procuring those groceries gets even more difficult.

Now take away the possibility of transit. Where does that leave you? Hungry, wherever you are.

According to a new study from NITC investigators at the University of South Florida (USF), there are 136,401 people in Florida's Hillsborough, Pasco and Pinellas counties who are both food insecure and lack adequate access to transit.

Food insecurity affects a wide range of people and most acutely affects vulnerable populations such as children, pregnant women, seniors and individuals with disabilities.

Aug 14, 2017
Principal Investigator: Brenda Scheer, University of Utah
Project Overview: How does transportation affordability vary between TODs, TADs, and other areas
Learn more about this research by viewing the related presentations and the full Final Report on the Project Overview page.